A few years back I asked a colleague about the origin of the 33 degrees of Scottish Rite Freemasonry. He was under the impression that Albert Pike was responsible for the change. What I had in mind was the expansion from the original three degrees to the current number of 33. It turned out that Pike's reforms trimmed the number of degrees back from an even larger number. (My colleague professed to initiation in both the York and Scottish Rites of that famous secret society. The Yorkies have far fewer degrees than do the Scotties.)

There is some evidence that the Masons got their start as a result of the persecution of the Knights Templar by King Philip IV "the Fair" of France and his diabolical Friday the 13th arrest of the Knights. Surviving members of that Crusader fraternity sought refuge with members of the stone mason guild. They supposedly created fake lodges of stone masonry to veil their underground political activity. They took on the trappings of the mason's guild such as leather aprons and guild initiation levels (apprentice, journeyman, and master). Those who contest this version of their origin have pointed to the founding of the Royal Arch lodge as its true moment of conception, but this merely added an additional type of political organization to a network of existing lodges.

Idries Shah makes a case that both operative craft guilds and speculative secret societies, such as the Knights Templar, had their origins in the Sufi tradition. The Sufis maintained libraries of classical literature that rivaled those of better endowed Orthodox monasteries. A case could be made that at least some of the Knights Templar studied with the Sufis during their sojourn in Jerusalem.

The fortunes of the Freemasons have waxed and waned throughout American history. They were very active early on during the Revolution and during the crafting of the Constitution. Thaddeus Stevens is famous for persecuting the Masons in the 1830s. Their recovery from this period of eclipse may have been a byproduct of Albert Pike's post-bellum reforms. They may have also received a boost by some of the incidents that transpired during the war when northern Masons came to the aid of southern brethren and their family members.

More recently the Masons have received attention thanks to Dan Brown's work. The feminist movement had taken some wind out of their male-only sails to place them in a fringe category at the turn of the current century. One of our students probed a local lodge to see what is now required for entry. In the past they required belief in a deity. The words he encountered were "higher power" which could be interpreted in a non-theistic manner. He did not pursue initiation in order to resolve this ambiguity.

What will become of the Masons? Will they return to mainstream status or will they be further marginalized? Will a less sexist, less monotheistic organization replace them in the long run? Or will they hold their own as a bastion of liberal conservatism?

Some time ago, before the election, I was of the opinion after reading about Ohio that Democrat voters in the US elections were being suppressed by the Republican party.

Now we have this:

Which seems, if not proof positive, at least convincing corroboration that such a strategy was in place in more than one state/district/jurisdiction.

Now Jim Greer seems to me to be dubious as far as reliable evidence is concerned, given his present and ongoing disagreements with Florida's Republican Party (which may well yet land him in gaol). However, I would contend that Charlie Crist's testimony is a different matter. And as for the other folk now stepping up to give evidence, well...

Open to: All, detailed results viewable to: All. Participants: 14

Now, in the opinion of the panel, what do folk think will happen to the perpetrators of this, ahem, anti-fraud policy?

And how does the average American voter feel about exporting this system to other parts of the world without the benefits of democracy?

And, as an extra talking point: how does the panel think this alleged voter suppression could be remedied?

Most of us must have heard about the Pirate Party already. It has grown into an international movement, and currently is most prominent in Sweden, Germany and elsewhere. And no, it's not just about copyright and the internet - in fact it's about civil rights, direct democracy and participation, transparency, freedom of information... and yes, patent law too of course.

Well, here's the case of the Pirate Party of Germany (PPD), which has gained a lot of prominence in recent years. They're also dubbed the Orange party (not to be confused with another orange civic movement turned into party, which has become famous and even held power for a while in Ukraine).

The problem with the German Pirate Party is that it's going through something like a crisis right now. It's losing of its initial influence, and running out of steam. And the examples from all that trouble could well serve as a lesson for other grassroots movements now turned political forces, elsewhere around the world - including across the Atlantic. 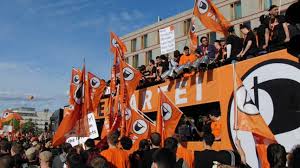 Krugman linked to this today.

Major advocate of supply-side economics admits that Keynes and Krugman have been practically completely right on the facts.

(Yep, it's another old Conservative Movement Republican complaining that when he tried to talk sense about science, reality, and data, he was shut out by the party. This is a genre now.)

It's gratifying to see one of the most influential advocates of the unsustainable wackiness called supply-side economics finally realize that this sort of policy doesn't really sustain broad economic growth.

It seems to have become a convention of corrupt politicians to strip it down to the following crude formulation: "Cut taxes. Win votes."

From where I sit, it seems supply-side politics is mostly bribery of special interests and flattery of public wishes for something-for-nothing. It's not real economic science.

P.S.: I've seen enough old conservatives in this position that I think there's a historical explanation for it. Movement Conservatism (as opposed to traditional moderate conservatism) is defined by rejecting science, reality, and data that don't fit certain preconceptions or certain ends. What they have done to Bartlett is what they and their fathers did to the liberals when they started this movement, and what they've done all along. It's the basic premise of the conservative schools, conservative media, conservative churches, and so forth--at least it's the basic premise for many in the movement. It's a shame that someone like Bartlett can't use his position to modify their thinking, but rejection of Keynes is a litmus test, apparently.
Collapse