The results of global warming will devastate Africa

During the President's press conference yesterday, my ears perked up when finally there wasn't a Benghazi controversy related question, or another question about David Petraeus, and a reporter mentioned global warming, and New York City mayor Mike Bloomberg's support for the President because he believed President Obama would be more likely to do something constructive than Mitt "I like coal!" Romney. The President admitted he had not done enough in his first term about climate change, but he wants to have a national "conversation" on the subject. And will talk with scientists and engineers on ways to create short term reduction for CO2. The president did not mention a carbon tax, and an administration official said there are no proposals for one. More alarming for climate scientists was President Obama's statement that economic concerns would be secondary to any discussions about how to prevent further climate change. This was alarming for a variety of reasons.

But the most recently published results of a NASA sponsored study of climate models has some very sobering warnings for the future of our planet and our species.

As the USA swelters through its hottest year on record — and the Earth sees yet another top-10 year for heat — a study published today in the journal Science says we'd better get used to it. The study finds that future temperature rises due to global warming will probably be on the high end of projections, as much as a potentially catastrophic 8 degrees warmer than now by the end of the century. Most predictions of upcoming temperature rises are roughly 3.6 degrees to 8.1 degrees Study co-authors John Fasullo and Kevin Trenberth of the National Center for Atmospheric Research in Boulder, Colo., reached their conclusions by looking at how well 16 top climate computer models reproduced actual relative humidity in the tropics and subtropics, as measured by satellites.

Higher levels of humidity tend to produce clouds, which remain one of the most vexing aspects of predicting future climate. Though additional clouds can cause temperatures to cool as less heat reaches the ground, they can also act to increase the heat that's trapped below them. In their study, the scientists used humidity as a substitute for clouds, since models cannot accurately forecast cloud cover. 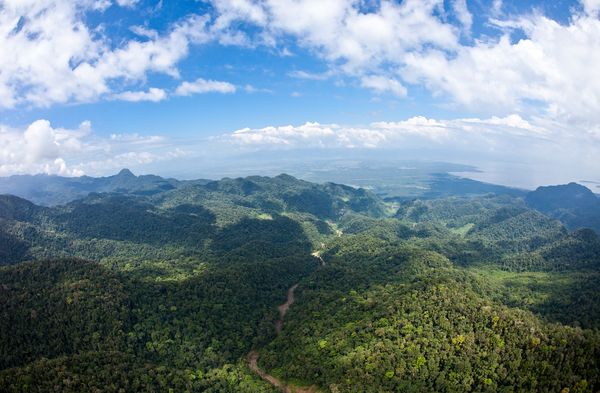 Clouds, such as these over Guatemala, play a little-understood role in global warming.

Clouds are an important factor in figuring out ultimately how warm it's going to get.

Clouds are key in pinpointing the level of temperature rise expected, Fasullo said. They exert a major influence on Earth's energy budget. Since they're white, clouds reflect sunlight, cooling Earth. Depending on how high they are in the atmosphere, they can also act like a blanket, holding in heat... Fasullo and Trenberth found that the three models that best matched the humidity observations were the same ones that predict the hottest future, with temperatures increasing 8 degrees F before century's end. The least accurate models over-predicted relative humidity and projected lower increases in temperature.1

Scientists have consistently stated a increase of just 5 degrees would mean Earth would be an unrecognizable place for humans. Earth's population would likely be reduced to about one billion, because of the dramatic and sudden climate changes damaging the eco-systems and subsequent inability for farming to keep pace (e.g. soil erosion, droughts, lack of drinking water, radically changing growing seasons, fisheries would be seriously impacted as badly too, since as the oceans warm and absorb more and more atmospheric CO2, the water will become significantly acidic). Also, previous climatic changes of five degree increases have been responsible for mass extinction events.2 Here is a National Geographic clip from a documentary on what we can expect with each increase of a degree from climate change.


What quite a few people don't know, is that the scientific community has had an extensive "conversation" about the impact of CO2 on climate change for over 70 years, and the irony is Air Force studies in the 1950s on heat seeking missiles is what prompted research well over 40 years prior to the first real public policy discussions on the subject (cf. the following video).

Global warming isn't the public emergency it should be, and it's almost like the President is completely oblivious to what is at stake.

"Republican presidential nominee Mitt Romney is telling top donors that President Barack Obama won re-election because of the "gifts" he had already provided to blacks, Hispanics and young voters and because of the president's effort to paint Romney as anti-immigrant."

"Among the "gifts" Romney cited were free health care "in perpetuity," which he said was highly motivational to black and Hispanic voters as well as for voters making $25,000 to $35,000 a year.

Romney also said the administration's promise to offer what he called "amnesty" to the children of illegal immigrants — what he termed "the so-called DREAM Act kids" — helped send Hispanics to the polls for Obama."

It's one thing to see this from insane Beck commenters, but another to see it from Romney himself. This call was to donors and you could say he had the incentive to say things like this, but if the higher ups in the Republican party honestly believe the "Obama won because he's giving away free stuff to blacks and latinos" line, we're going to see a Democrat in the White House in 2016.
Collapse