One of the chief complaints made against the electoral college is that it encourages people to vote "tactically" rather than for a candidate that they genuinely like, out of fear of seeing their vote wasted.

This argument has never really born up to scrutiny in my mind.

You see, in most states there is a Party in Government that will either by simple demographics or by ruthless control of the polling process deliver that state's electroral votes to the candidate chosen by that party. States that lack the demographic lop-sidedness or political machinery needed to guarantee a result are refered to as "Swing states". And unless you live in a swing state the chances of your vote deciding a national election is infentesimal.

If the value of a vote is judged on it's ability to change the result than the votes of everyone not living in CO, OH, VA, and WI (any state not marks as being Red or Blue on Jeff's map) was wasted before the polls even opened.

So why vote for a candidate you don't like?

You see while everybody makes a big deal out of Rasmussen vs. Gallup and all that there is only one poll that actually counts and that is the one that occurs tommorow.

If you don't live in a swing state your vote may have the most impact by voting Libertarian, Green, Social Justice, CPUSA, or writing in someone else. Just vote. The bigger their numbers, the more it will make the Parties in Government stop and think. They won't do anything about it, of course, but the data will empower those who have not been entirely coopted, or who see the opportunity to make a name for themselves as reformers.

Besides, if any third party recieves 5% of the popular vote, they qualify for Federal funding in the next election cycle.

"Democracy is the worst form of government, except for all the others". -- (One plump man with a big jaw and a cigar). 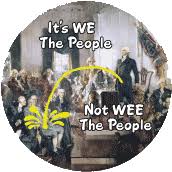 WARSHINGTON, District of Whocareswhereville. O, glory! O, hallelujah! Last night, the most historic event suddenly and inexplicably happened in this great nation of these The United States of The America. A change was made to the Constitution by We The People™, adding one last, 28th Amendment, which was instantly ratified with a 99.9% majority, and ultimately brought real democracy to the God-chosen people of The America.