The United States, for all that we think of the two-party system as a continuous, stable pattern, has had a track record at least in its earlier years of seeing entire party systems collapse without trace.
( Collapse )

( Collapse )
Ultimately if societies want to fix their problems in this sense of accountability, they have to work on their own problems instead of mindlessly copying the systems of other societies and expecting difference to magically hand-wave all of the prior issues. Instead the new system will rapidly come complete with its own problems, and then the utopians wake up to the reality that the pigs that overthrew the farmer are now just as human as the farmer was.

If *this* is what passes for a repubtable analysis across cultures on the Beeb, I think its standards have been slipping for a while. The idea that there are degrees of legitimacy that differ among 'cultures' such as 'China' the unified bloc (when it's very often been anything but) and the unified West that is a heavily sanitized view of the West that isn't even recognizing the deep divergences in Western politics is itself troubling, but a viewpoint that requires a larger, longer discussion than I'm willing to write after sundown on a Sunday night. For the short and nitty-gritty version, the point is a terrible one that has too many failing in-built assumptions without proof in them, using a word that has no consistent or coherent definition, and creates too many new questions instead of answering old ones, so the whole article is for lack of a better word a joke, not to be taken seriously.

Back in 2003, a symbolic act was done in Lima, the capital of Peru. The mayor Luis Castaneda Lossio ordered the removal of the equestrian statue of Francisco Pizarro from the central square, and the transformation of the area into a pedestrian street. His motive? Not just practicality (so that people would have a place to meet and have a stroll in the evening), but also cultural and historic. Pizarro was the symbol of colonialism. So after reigning over the central square of Peru's capital, the heir to a lowly Spanish lordling (hidalgo) who brought European domination into the Andes, eventually had to give way to the new symbols of power in the country of the Incas. At first the statue spent some time in a store somewhere in the municipal buildings, then it ended up in a special park, next to other pre-Hispanic and Hispanic statues and artifacts. And the heirs of the Incas applauded in jubilation. For the Aymara and Quechua peoples of the Andes, Pizarro's arrival was never the beginning of Peru's true history. Rather, it had been the end. 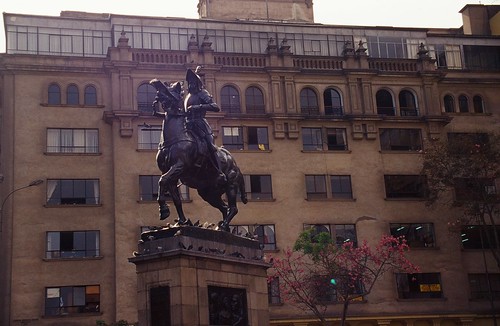