Children attending middle school today have no direct experience of the events that led to the quagmire in Afghanistan. Likewise, they have no experience of the pre-9/11 world. They have grown up in a time and place that bears the imprint of that tragic act of war and all of the knee-jerk stupidity that followed in its wake.

A comparable event for people of my generation might be the construction of the Berlin Wall or, better, the Cuban Missile Crisis. It was an event that left a lasting impression on the adults and older children of our youth. Its trauma was tangible given that it was the closest the US and USSR got to a full blown exchange of nuclear munitions. The fear left a mark on those who lived it while the youngest of us picked up on it in a second-hand fashion. It seemed as if the world was always that way just as today's middle school students know nothing of life before Homeland Security and the Patriot Act.

The collapse of the Soviet Union has made it possible for us to get a glimpse of the machinations behind the scenes in Moscow. A. A. Fursenko and Timothy Naftali published a joint study of the event as an East/West collaboration. The work includes the impression that IRBM (intermediate range ballistic missile) deployment by US/UK/NATO in England, Italy, and Turkey made on Soviet leaders. These missiles were brought up in the negotiations over withdrawal of Soviet MRBs and IRBMs from Cuba. Another historian, Philip Nash, has published an account of these other missiles and President Kennedy's secret agreement to dismantle them.

The event left us with expressions such as being eyeball to eyeball when the other guy blinked as well as an eloquent description of a rope upon which the knot of war is tied. Dean Rusk, the American Secretary of State at the time, describes the origin of the "eyeball to eyeball" remark in his personal memoir.

Kennedy came away from the event with mixed reviews. He was seen as a strong leader in the eyes of some and a spineless wimp in the eyes of others. Although Kennedy achieved the withdrawal of Soviet IRBMs from Cuba, he promised in return not to invade Cuba and to dismantle American IRBMs. This did not sit well with hard line anti-Communists at the time. Although the removal of the missiles occurred months later, their removal was suspected as a concession to the Soviets. It turned out to be an accurate suspicion since Kennedy's promise to Khrushchev included a removal time frame that was adhered to.

Do you have any observations on US/Soviet/Cuban relations to mark this 50th anniversary of the Missile Crisis? Are there any lessons from that event that political leaders today can learn from?

Links: Fursenko and Naftali's book, One Hell of a Gamble. Philip Nash's book, The Other Missiles of October. Khrushchev's "knot of war" letter. Dean Rusk's memoir, As I Saw It.

This is what I meant when I was talking about corporations having the responsibility to be "good citizens", i.e. helping communities (or entire countries) in distress not through simply dumping money at problems and pouring resources into bottomless broken buckets, but doing smart investments that would benefit all sides involved.

A South Korean textile company is opening a complex of factories in North Haiti, hoping to do good business, produce textiles, use the cheap labour force of the impoverished country, all the while creating jobs, building infrastructure, placing Haiti back on the map of industrial production, and hopefully creating opportunities for Haitians to help themselves and alleviate their lives.

This of course would require a favourable combination of positive circumstances, and I think I can understand the concerns of the critics that it wouldn't work quite so well in the Haitian case because of the many challenges. The concerns go into several directions: 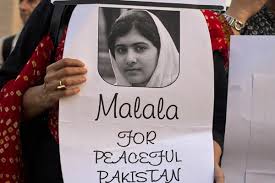 This is Malala Yousafzai, a Pakistani girl who's not afraid to raise her voice. A year or so ago mass protests in Pakistan met the news of bin Laden's death; the Taliban were called freedom fighters, and US flags were being burned everywhere. Today there are protests as big as those ones, but this time against the Taliban. And they're being called terrorists. The Pakistanis are used to terror attacks and all sorts of ugly assaults, but the brutal attempt for public execution of a young girl couldn't but put the final drop in their cup of patience.