Do you remember the debate club/team from high school, college or university? Classically there were a number of "issues" up for debate, usually known well in advance by both teams. But it was a coin flip if you were going to argue for or against an issue. Of course this meant that one would have to be well versed on a subject. One could be forced to argue for an issue like same-sex-marriage or argue against it.

What this did was let contestants (combattants?) really examine both sides of issues and thereby better form and inform their own personal opinions. In other words it taught the debate team participants to think.

Now we can read the Presidents record and his platform just as we can for Romney. These debates only serve as a platform to see their poise, mannerisms and eloquence of phrasing in action. Perhaps it serves to clarify their positions but that's really a secondary objective as opinions evolve and even change over time.

What I'd love to see is Obama argue why Obamacare sucks. I'd love to hear Romney explain why the wealthy should pay way more in taxes. Not because they believe it, but to show they've really looked thoughtfully at both sides of issues and formed an educated conclusion.

Because as it is now, the debates offer clarification, a gaffe, perhaps even a great quote. But they don't show any real leadership skills. And by that I mean leadership that not only has vision on which direction they want the country to go, but leadership that can confront an unexpected situation and make decisions only after careful deliberation. I mean that's the kind of leadership I'd like to see.

In a recent post a statement was made that slaves carry on a mindset after slavery that ensures that while free, they remain slaves even in freedom, because slavery is 'easier.' This to me is extremely morally offensive, and more to the point, directly contradicting all the instances where slaves do and have challenged slavery. As the last post contained a long speech setting out that view, I shall provide my own fictional dialogue here under the cut expressing the counter-view:

[this is a spoiler link (appropriate since it&apos;s the end of a movie)]
MacDonald: Caesar... Caesar! This is not how it was meant to be.
Caesar: In your view or mine?
MacDonald: Violence prolongs hate, hate prolongs violence. By what right are you spilling blood?
Caesar: By the slave's right to punish his persecutor.
MacDonald: I, a decedent of slaves am asking you to show humanity.
Caesar: But, I was not born human.
MacDonald: I know. The child of the evolved apes.
Caesar: Whose children shall rule the earth.
MacDonald: For better or for worse?
Caesar: Do you think it could be worse?
MacDonald: Do you think this riot will win freedom for all your people? By tomorrow...
Caesar: By tomorrow it will be too late. Why a tiny, mindless insect like the emperor moth can communicate with another over a distance of 80 miles...
MacDonald: An emperor ape might do slightly better?
Caesar: Slightly? What you have seen here today, apes on the 5 continents will be imitating tomorrow.
MacDonald: With knives against guns? With kerosene cans against flamethrowers?
Caesar: Where there is fire, there is smoke. And in that smoke, from this day forward, my people will crouch and conspire and plot and plan for the inevitable day of Man's downfall - the day when he finally and self-destructively turns his weapons against his own kind. The day of the writing in the sky, when your cities lie buried under radioactive rubble! When the sea is a dead sea, and the land is a wasteland out of which I will lead my people from their captivity! And we will build our own cities in which there will be no place for humans except to serve our ends! And we shall found our own armies, our own religion, our own dynasty! And that day is upon you... now!

Freedom is a complicated thing, to be sure. But in reality slaveowners always have and always will fear that even when they subsist in idleness from the work they extract by the lash from their slaves that the slaves turn on them. Every single chance that opportunity presents itself, in all societies, and in all cultures, this pattern recurs.
( Collapse )
. That slavery dies and creates hollow shells of itself is not a sign that slaves cannot leave slavery, rather it's a sign that real social change is not simply a matter of shattering classes and shooting the elites and replacing one set of masters with another, but must be more gradual and intended to work within structures, not to attempt to impose alien ones by the law of fire and sword, an imperfect and uneven means of progress at the best of times.

In closing, I provide here a link to Frederick Douglass's speech on What to the Slave is the Fourth of July as Douglass expressed points here that are directly relevant:

I know, I know. Game of Thrones can be either loved, or hated, or just "meh". No middle ground? Fine. Granted, all the super-hype about it around the Interwebz and fandom circles may've turned you into either a squeeing devotee, or an eternal GRRM-basher. Fine, it's no more than another fictional story, ganking lots of elements from prior, greater works, no problem. And the TV adaptation? Boobs and cum and blood for the sake of TV ratings, you say? Fine, I agree. Oh, and some elaborate political plots just to spice it up, oh my. Love it or hate it, or just be "meh", but I think it does have some merits after all. Such as some fundamental issues being raised that are worth the debate IMO. So what are those?

Ps. Oh, and btw could we keep the spoilers to a minimum plz? :)

Putin to Extend Lease on Kyrgyz Base, Settle Debt During Visit
...and:
Russia extends Tajik base lease to curb militant threat

While the US are wondering how to make the most gracious exit from Afghanistan, Putin ain't sleeping. There's one rule in geopolitics: there can be no vacuum in international relations. Whenever someone budges in the Grand Chess game, another will soon fill the gap. So the players better be prepared for the next move, before it has even happened. Otherwise you're left on the sidelines. 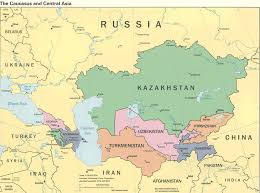