"Chinese growth" has typically become a name for headlong development and expanding economy. And that's normal, because China has enjoyed unprecedented development for more than a decade. At some point it looked as if China was immune to any global economic cataclysms. Especially when compared to the sluggish US recovery and Europe's continuous sinking. In the meantime China has enjoyed two-digit annual growth. Until now.

This year things are pointing to a landing back to reality. The latest data indicates that the Chinese economy is slowing for the 7th quarter in a row (the Chinese manufacturing contracting for 11 straight quarters), the foreign investment and imports are slowing down, and exports too. For the first time since the late 90s the GDP growth is expected to drop below 8%. In a world that's increasingly dependent on China's well-being, where the US is still hobbling shyly out of the crisis and Europe is going from bad to worse, that's bad news for everybody.

Actually I'd posit that China's capabilities are still being overestimated. Although it's the 2nd economy in the world, it's still largely a developing country. Granted, China may still be one of the few places where consumption continues growing instead of shrinking. But meanwhile a huge part of the population continues to live in underdeveloped regions, and though the internal consumption is growing fast, it's far from being sufficient to become the engine of world growth.

I went through so-called post-debate fact check at nytimes.com.
Obama-press is so funny.
Almost everything Romney said was in the list to check, however almost nothing from Obama's speech was there. Even more, if something said by Obama was wrongit wasn't stated even in first paragraph of explanation [even if checked].
If something was inaccurate on Romney side it was said directly and without necessary explanations. If Romney was accurate, it was usually a page-long explanation why Obama is still better.
[Spoiler (click to open)]
Most offensive to my mind was a "NYT Graphics" about "Obama is on track for doubling exports" which was once claimed by Obama as a target.
Graph not even adjusted for inflation and such graph shouldn't be used for a fact check at all. Even though they used plain extrapolation instead of projected numbers.
Export dropped in 2009 during Obama's presidential and still isn't counted as his fault. But why his faulty projection to "double export" isn't counted as a lie since started from the lowest point under Obama, not from year before he came?
nytimes.com should have started to count from solid 2008 number not from faulty 2009 number.
But even then inflated picture shows that Obama is behind trend, still header says "on track". Simple draw line from any year before 2009 to 2011 number no way you will be "on track", only way to say he is on track is to draw line from 2009 number to 2011 which is ridiculous due to low recovery speed. Moreover imports under Obama is also increased, sums up to trade deficit every year during his term and in nearest future.
If he wanted to have jobs in USA why import risen so much?

Nobody even asked Obama, where is his budget deficit reduction plan when "1 dollar of tax increase accounted for 2.5$ of spending decrease".

Nobody questioned Obama's faulty promise to cut budget deficit by 5.4 trillions during 10 years!!!!
Deficit cuts he mention multiple times is for duration of 10(!) years, how he can promise something that will be 6 after his last term ends?
Is he going to be a president of USA for another 10 years? Do fact check: what constitution says about it?
Let me ask you - what will be debt increase during those 10 years?
And what will be principal and interest payments in 2022 budget?

That's very impressive that Obama isn't even responsible for 2009 budget deficit (BTW he voted for it), but is projecting something till 2022.
But even then why not to mention that any given two years deficit under Obama will be worse than two years deficit under Bush? Total debt increase under Obama and last year of Bush is astonishing! Why not to mention that in fact-check?

Why not to mention that due to Obama's policy deficit risen 3 times from if count 2008 and about 8 times from from 2007?? And he is telling us about deficit reduction?
5.4 trillion over 10 years in deficit reduction won't help him to get even 2008 result by 2022, not even close to balance budget.


Is that so called "fact check" and neutral media?? 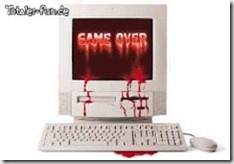 My view is that, just as in many businesses, brands really matter. There will always be a role for destination sites. Eighty million users come to our destination. I think that will be the vast majority of our future business. - Meg Whitman

And the bleeding continues. According to Computerworld, the Chinese company, Lenovo, would soon be taking over as the industry leader in PC manufacturing. This would edge out HP and Dell, who have been the two American leaders in the personal computer industry. HP has suffered a devastating quarter, and its future may be in question. I have personally observed HP’s spiraling regression that started when they stopped being the world’s premiere printer manufacturer and tried to be a tablet manufacturer.

[Where do we go from here?]

The number of PCs being purchased worldwide is declining. The margins on PC’s tend to be low, and with the orders for PC’s going from 1 godzillion to .999999 godzillion (figuratively speaking), HP and Dell are abandoning it as their signature business. HP, at one point, was considering selling off or spinning off its PC business. This might be somewhat understandable, but the prospect of discarding it completely is probably not in their best interest.

Some others in the technology chattering class could try to rationalize it, declaring that the PC is just a commodity and that we've entered the post-PC era.

That would be wrong. We're no more in the post-PC era than we are in the post-car era. The PC is, and will remain, a monumentally important part of getting work done.

The PC is a creation tool. Mobile devices are consumption tools. PC’s will still be relevant when mobile devices become wearable and smart phones and tablets have gone the way of the abacus. Meg Whitman is correct. Where would Kimberly-Clark Worldwide be without the Kleenex brand? Where would 3-M be without the Scotch brand? Amazon loses money on every Kindle Fire they sell, but keeping it prominent in the public eye is what gets their digital content sold.

Although a business that completely stagnates tends to fall by the wayside, it would seem that innovation should be more about improvement in consumer’s quality of life, while maintaining current utility, than chasing the latest superficial ultra-high profit gimmicks to manipulate the markets. The hunger that used to drive business ambition has now been dislodged by insatiable greed. Quality and Customer Service appear to be buzzwords of a bygone era.

I have said before that the only industries America seems to excel in lately are weaponry and empty financial paper. The last thing we need is to be bleeding our technology sector, especially to China. Despite claims that government intervention in American business inhibits our innovation, it seems that government intervention in Chinese business is what makes their industry work.

Heard on BBC World, "Have Your Say" in reply to comments regarding funding for green and renewable energy:

Well... hmmm... I ponder how you will find out it works if you don't put money into it.

History is FULL of examples of times when governments have funded potential advances BECAUSE they need to be demonstrated to work before businesses will accept them. Businesses are not always (more often than not) to invest in unclear or uncertain development.

If you wait until its a crisis, development becomes very expensive and more difficult.

It is obvious that fossil fuel energy supplies are limited. How limited is open to some debate - which is silly and pointless. We have plenty of other reasons to work on these processes that have almost nothing to do with the availability of fossil fuels - and we don't even need to discuss global warming, either.

Huge quantities of scientific and technological research are funded by and / or conducted by government. Those advances are, more often than not, sold or given to private industry who are then able to capitalize on them.

Once an industry takes off, yes; private industry does a fair bit of its own research and funding. These things need nudging to get them started.

The comment that I hear is, "If this was really profitable than industry would take it on."

That's absurd in that new and emerging technologies are often neglected or even buried by industry to dismiss a competing product or to protect existing ones. Also, industry doesn't like taking chances on new technologies. We can advance things much faster by targeting potentially useful technologies early and get a step ahead of others who are already using their governments to move things forward.

"News is like a drug. It only reaches into your pocket". It's strange to read that in an actual media publication, but why not look a bit more closely on this intriguing argument?

^ This paper here makes some interesting observations. For instance, the average person "wastes" 1-2 hours a day on learning news about what happened around the world today. The news biz makes tens of billions worldwide in the process. We could probably easily imagine our life without some other products of the same caliber, like a Coke, or a coffee. But the news? Hmmm...

So, fellow members of talk_politics, something's been bugging me. Some recent posts have reminded me of something, but I wasn't sure if I was just imagining it, or if it really happened.

Oh, wait, here it is: What does Russia mean for you, neighbor, ally or enemy?

Especially the question: "If you had experience contacting or reading bloggers living in Russia, you may be swayed to vote for such a tough to Russia candidates as Mitt Romney?

What do you think: have there recently been any Russian bloggers who have been trying to sway the Americans in this community to vote for tough to Russia candidates like Mitt Romney? :)

In general, what would the motivation be for doing something like this? Getting this type of "tough" candidate elected could undermine leadership in another country, as it could make it more difficult for them to operate and function, in terms of both the economy and diplomatic relations. The leadership could use this "tough" candidate to build power, though, arguing that they must be strong enough to protect against the newfound enemy, unite against a common enemy, etc.

How does the US election affect politics (or other areas, like the economy) around the world, if at all? What stake would non-citizens have in trying to influence the election? The President has a lot of power, sure, but I can't say that American voters (or voters of any country) think about anything but their own self-interest when voting. They might think about foreign relations, sure, but that's probably the extent of it, and that's secondary to domestic issues. If the US election does have international effects, should that be a factor in each US voter's election decision?
Collapse