Scientology has made a name for itself by publicizing the history of biological psychiatry but they did not invent that history. It has been documented by a variety of people independent of L. Ron Hubbard's devotees. Biological psychiatry differs from more rigorous forms of psychiatric practice in its focus on biochemical therapy to an almost exclusive degree. It subscribes to a paradigm of psychosis that is grounded in the genetic make-up of the individual with little or no concern for environmental factors.

The notion that degraded mental states derive from genetic factors predates the introduction of major tranquilizers as the primary form of therapy for patients who are considered psychotic. The genetic paradigm shows up in the writing of physicians who espoused the sterilization of mental patients in order to prevent them from breeding psychotic children. It ultimately derives from the use of animal husbandry to breed animals with specific personality traits. If animals can be bred to be either docile or aggressive, these must be hereditary traits. Such logic deliberately ignores techniques that breeders use to train animals to behave pleasingly. A pit bull can be brought up to be either a house pet or a competitive fighter.

Jay Joseph has published a review of biological psychiatric research that calls into question the conclusions of those studies. He points out a variety of mistakes that researchers made, either by omission or commission, to conclude that psychological complaints have a genetic foundation. The greatest of these flaws is the deliberate dismissal of possible environmental factors. It could be considered a form of willful ignorance.

Biological psychiatry is a continuation of the eugenic school by another name. Although it does not sterilize the people it sees as having "bad" genes, it treats them in a way that reduces their capacity for parenthood. There are cases of children of people stigmatized with a psychiatric label being defrauded of their rights to contact with their stigmatized parent. This is the kind of environmental factor that could result in driving children crazy.

One of our students observed that national socialism was defeated in Germany but it has yet to be defeated in the US. How do you feel about the legal recognition of a "medical" practice that has its roots in eugenic thinking?

41 years ago today, my wife and I were married. 30 years later, we had big plans (I no longer remember what those plans were) to celebrate our 30th. Our 41st we celebrated last week.( Collapse ) 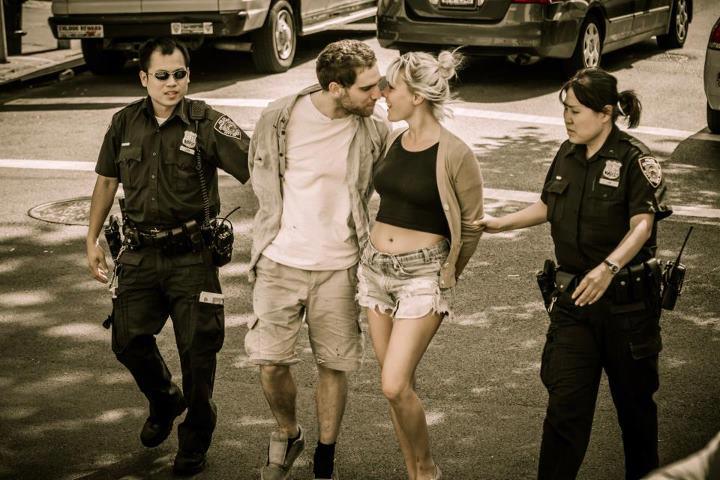 
It's pretty rare when we can talk about the politics of art in the community, but I thought this would be an interesting fit. In New York City, a recent local story has reignited a new debate about graffiti as either art or vandalism. Some background: Mo Gelber is a photographer who was looking for a perfect shot to enter into film director Ron Howard's photography contest Project Imaginat10n, which will feature ten winners in a short film. Mr. Gelber was in front of Manhattan's criminal court when he saw a couple being escorted by two police officers and captured his photo (which he entitled The Last Kiss. The fly in the ointment? In order to submit the photograph for the conest, Canon (one of the sponsors) required signed releases from anyone in the photograph, and that meant tracking down everyone in the photograph, and do that within a few days to meet a deadline. Now legally you don't need releases for anyone in a street photograph, but the contest sponsors required it.

Through social media, the woman in the photograph came forward (she was released because it's first arrest) but she wouldn't name her BF because he was being held in jail. To shorten this story, Mr. Murphy was released, but faces multiple charges as he was identified as the tagger "CASH4." If you live in or travel to Bushwich, LES, or ride the subway on J/M/Z line, chances are you've seen his stuff (I've noticed it before). I'm just wondering what does the community at large think about this issue. Do you even notice street art?

CASH4 tag on the left in this photo.

Because he's facing multiple charges with some serious fines and jail time, Mr. Murphy's lawyer refused to allow her client to sign the release for the photography contest, saying it could haunt him the rest of his life.

I was more surprised at the REACTION to this story. A lot of folks hope he's severely punished because this type of vandalism costs building owners millions a year. On the other side, you have people saying "this is real art, and lets not get crazy here, this is a non-violent crime (IF it's a real crime anyway)." New York along with several other cities in the early 1990s made a concerted effort to rid themselves of "tag-art" on the transportation systems and even developed anti-graffiti police task forces, citing it as quality of life issue.

I certainly don't want to see subway cars that look like the photograph above, and if someone vandalized the exterior of my building, I wouldn't like it too much. There are beautiful examples of street art though, such as the work of Gabriel Specter (cf illustration below), who typically makes anti-gentrification pieces in areas slowly being developed by "hipsters," and driving out minority residents. I make a distinction between what Mr. Specter does versus the crude designs of Mr. Murphy and while I know that's not very consistent, I wished there could be some happy medium between these choices. It's interesting to note: Mr. Specter has NEVER been arrested or charged. 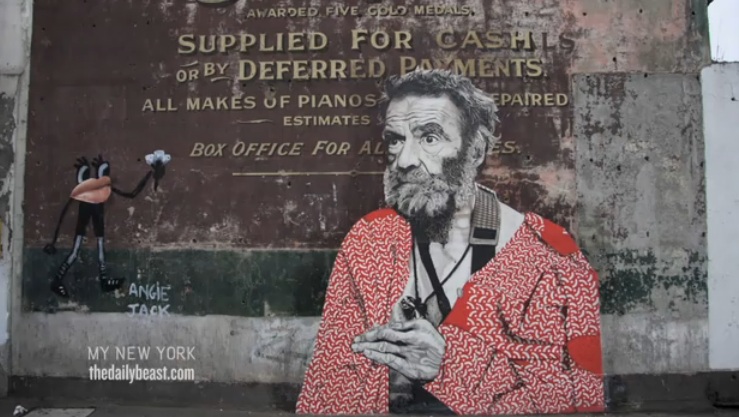 Supplemental material: A short feature about Mr. Specter produced by The Daily Beast

...Or rather, the plan of a self-appointed peace envoy who presumes to speak on behalf of the entire Al Qaeda (if such an organization really exists, as opposed to being a mere label which most extremists tend to stick to themselves at this point). Anyway, behold the ingenious plan:

It has bullet points, OMG!