People have been noting for years that voucher programs, which taken in the abstract might seem like a good idea, are usually just thinly disguised attempts to give money to Christian private schools. The supporters of them often come up with a lot of fancy sounding ideas that make it sound like it's "increasing choice" or whatever, but then cases like this come up and it's obvious that they don't care about choice. What they want is for everyone's tax dollars to go to sectarian, Christian education.

This type of conflict seems to come up any time one of these "religion in education" situations comes up. The problem is that the conservative type of Christians that support this are also unlikely to want forced education of any type that doesn't match their religious beliefs -- even other sects of Christianity, much less Islam.

The situation is not improved by the fundamentalist and right-wing narratives about the founding of the country that are fed to the less-knowledgeable in their ranks. A frightening number of people believe that the founding fathers intended to create a Christian nation and that the 1st Amendment's only real purpose was to prevent the federal government from elevating one sect of Christianity above the others, and to prevent any Protestant denominations from being outlawed. The "religious test" clause was obviously not intended to allow non-Christians into the government, but just to prevent banning of any Protestant denominations. And so on. 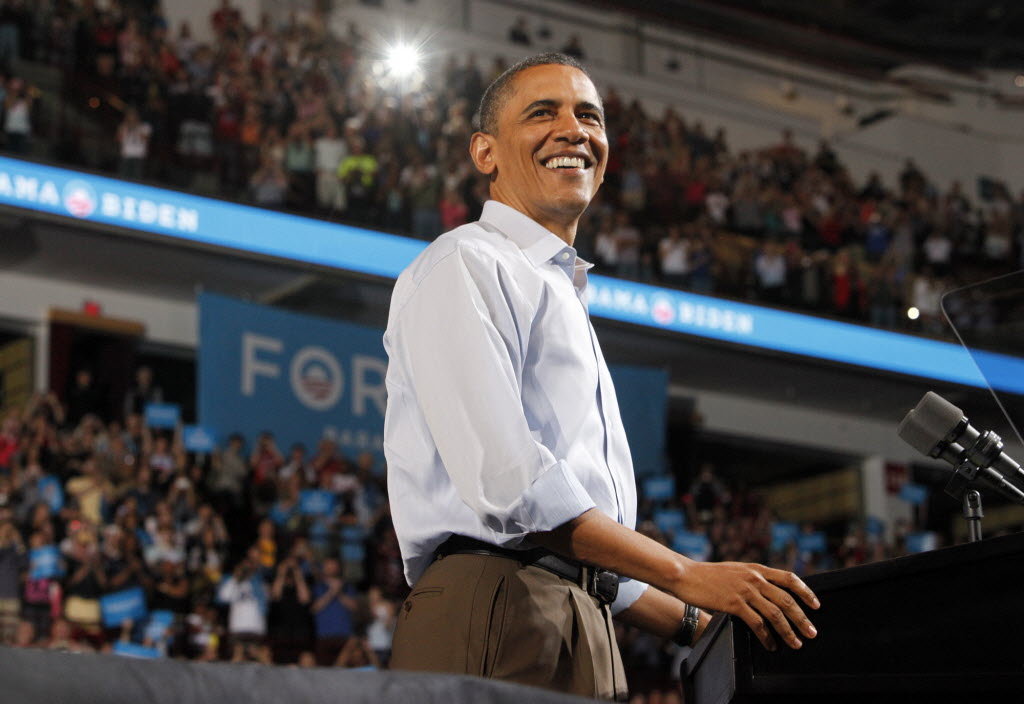 New polling has given reasons for smiles.

New polling suggests that President Obama is pulling even further ahead of Mitt Romney in key battle ground states, including Ohio, Florida and Pennsylvania with Ohio showing the greatest shift. For the last month the Obama campaign has run an every effect series of ads highlighting Mitt Romney's record at Bain Capital highlighting that firms closing of many plants and sending jobs overseas. In the industrial rust belt, these ads resonate in a very powerful way. According to Quinnipiac polling, the President has a nine point lead now increasing his lead from what was essentially a statistical tie in their last poll in May.

[More behind here]
President Obama's recent executive order has had an impact on these polling figures as well.

But the Obama campaign got good news, as registered in this poll, in the strong positive reactions to the new immigration executive order recently announced by the Obama administration 1. Majorities in all three states expressed support for "a new policy in which young illegal immigrants who came to the country as children will be able to obtain work permits and will not face deportation." In Florida, voters say they support that policy by a 58-to-33 percent margin.

That mirrors what was also found in a recent Bloomberg poll, where 64 percent of likely voters supported the president's decision. And while immigration reform is not a high priority with the Bloomberg poll respondents (only 4 percent considered it a high priority), in states where Latino voter demographics favor Democratic candidates, support is overwhelmingly in favor of the policy change. 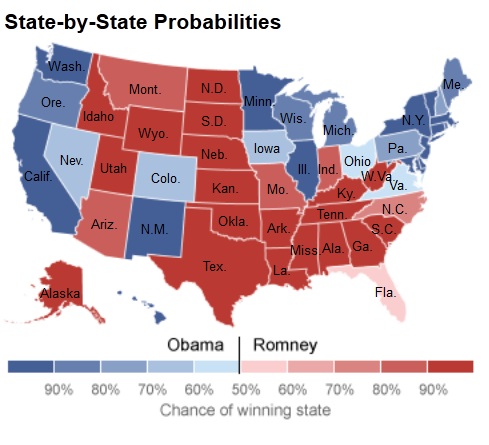 An NBC Wall Street Journal poll also found some interesting trends in swing states: Mitt Romney's favorable-numbers have dropped. A month ago, Romney’s favorable/unfavorable score stood at 34-38 percent nationally and 36-36 percent in the 12 swing states. But in this latest survey, his national fav/unfav score is 33-39 percent and 30-41 percent in the swing states. The reason for the increase? Scrutiny on Romney's leadership at Bain Capital, and his being perceived as out of touch with ordinary people. 2 While the MSNBC story indicates a "dead-heat" the interesting thing for me, is Obama is making significant strides in the swing states. And as Nate Silver notes, that is where the election will be won.

In other election news, Larry Sabatohas an interesting article on who Romney will pick for V-P. And it seems Bob Portman is the leading candidate (but not the only one). Sabato calls the potential Republican ticket as "Vanilla and Vanilla," with the Romney camp making every effort to play it safe. There are other candidates mentioned, Tim Pawlenty and John Thune. You can see Mr. Sabato's list on the link above.

Bob Portman, Ohio seems to be the leading VP candidate for Mitt Romney.

The usual caveats about polls apply: it's early, there's the Supreme Court decision on the Health Care Reform act due tomorrow, and there is still four months left (doesn't it seem like the election never ends?).

1. Under the new policy, according to the Department of Homeland Security, immigrants under 30 who were brought to the United States before the age of 16, meet certain qualifications and "do not present a risk to national security or public safety" will be considered for relief from deportation - effective immediately. The policy is similar to the proposed DREAM Act, which was voted down by Congress in late 2010. But it does not provide a pathway to citizenship, which the DREAM Act would have. Source: CBS News.

The expectations for this event were big. 20 years have passed since the earth summit in Rio de Janeiro in 1992 where some historic decisions regarding the greenhouse emissions were taken. Now the hopes were that the new Rio+20 conference would outline the new plan for sustainable development and reducing poverty within the next 20 years.

But was it worth the waiting? Ban Ki Moon declared this forum "a once in a lifetime opportunity to make real progress toward a sustainable economy for the future". Delegates from more than 190 countries took part in the 3 day long forum that finished last weekend. And also many NGOs and private entrepreneurs. The leaders of the biggest developing economies were also there - China, India, Indonesia, and South Africa too. But Obama, Cameron and Merkel only sent their envoys to represent them, confirming the concerns that the ecologic meeting would be overshadowed by the crisis in the Euro zone, the US presidential election and the Arab spring.

Actually if we look at the larger picture, Rio+20 may not look like such a complicated goal. Sustainable development means using natural resources in a way that would not exceed nature's capabilities to cope with their recovery. If the world economy is adjusted to this goal, what remains is to put the necessary measures into an official document and subscribe to it. Sounds easy... but it isn't. There are all sorts of obstacles at every step along that road.

Things have changed somewhat since the 90s when everyone used to talk about ecology. Now it is more about sustainable development. The term gradually became mainstream exactly after the 1992 summit in Rio. And simply put, it means achieving a balance between environment, economy and social development. But did Rio+20 meet the big expectations? Or were the predictions that this conference would only name the global ecological problems without finding solutions for them, proven true?

Hey guys! Long time no post. Forgive me if this was mentioned before (I'll promptly delete it if so), but I did a cursory scan of our fine community and didn't see much mentioned about this topic/article:

The article makes some very interesting assertions about the whole Eric Holder/ATF controversy. First of all, the entire thing appears to be a fabrication. In fact, not only were weapons NOT supplied by the ATF to cartels as we've been led to believe, but it may be the policies of groups like the NRA that actually have led to the murders of border patrol agents and to the Mexican cartels getting armed to the teeth.

I'd like to see more info on all this, but if this turns out to be true how fast do you think the GOP will try to spin their way out of this fiasco of their own making? Will the so-called liberal media even cover this pesky possibility? Or will they continue their gutless trend of sacrificing truth on the altar of "fairness"?
Collapse