Updated at 8:18 a.m. ET: PESHAWAR, Pakistan -- A Pakistani doctor accused of helping the CIA find Osama bin Laden was convicted of high treason and sentenced to 33 years in prison on Wednesday.

Shakil Afridi ran a vaccination program for the American intelligence agency to collect DNA and verify bin Laden's presence at the compound in the town of Abbottabad, where he was killed last May by U.S. commandos.

Secretary of State Hillary Rodham Clinton has previously called for Afridi to be released, saying his work served Pakistani and American interests.

Afridi was also ordered to pay a fine of about $3,500, Nasir Khan, a government official in the Khyber tribal area, told The Associated Press. If he doesn't pay, he will spend another three and half years in prison, Khan said.His imprisonment is likely to anger ally Washington at a sensitive time, with both sides engaged in difficult talks over re-opening NATO supply routes to U.S.-led troops in Afghanistan.U.S. officials had hoped Pakistan, a recipient of billions of dollars in American aid, would release Afridi. He was detained after the unilateral operation which killed bin Laden and strained ties with Islamabad.In January, Defense Secretary Leon Panetta said in a television interview that Afridi and his team had been key in finding bin Laden, describing him as helpful and insisting the doctor had not committed treason or harmed Pakistan[chessdev]  WTF!?!?   Allegedly these guys are our allies in the "War on Terror".  And they sure are quick to accept billions of dollars in American aid, including after several earthquakes... BUT we find Bin Laden virtually down the street from their government AND they're going out of their way to punish people who helped get Bin Laden???My first thought for balancing the budget would be to withdraw some of the aid we're giving that government -- if they're going to take our money and still try to screw us over, then let's give it to OUR causes and let *those* screw us over instead...

Or is there some rationale that isnt as sinister as I'm thinking for why they would sentence this guy so harshly?

It was a routine Senate vote. The Republican House had passed (330 - 93) a funding bill for the Export-Import Bank of the United States, one of the most mundane and routine things the government can do; and when Harry Reid wanted a fast vote to get to other important issues, Senate Republicans tried to delay the vote by putting several amendments up for a vote (a time delaying tactic since typically such amendments would never pass in the first place). Reid couldn't get the bill voted on without having a vote to end debate (i.e. "cloture"), which he couldn't do because it required 60 votes. He was clearly frustrated over how bogged down every vote has now become, and in an rather unusual move, he took to the Senate floor and apologized directly to Senators Udall and Merkley for not heeding their advice, and not supporting a rules change at restricting the use of the filibuster and cloture votes. Five days later after debates and speeches on the amendments (none were passed) the Senate passed the bill.

Poll after poll consistently shown American's displeasure at the gridlocked nature of the Senate (and these polls consistently put the blame at the GOP). Several political commentators have commented on how this grid lock is pretty new and historically significant. Ezra Klein recently pointed out that when in 1964 after the Democrats beat Barry Goldwater by huge margins both at the Presidential and Congressional levels, Lyndon Johnson was laying out strategy for passage of the Medicare Bill, an aide pointed out in an internal office memo, that as a result of the Democrat victory, it would pass by 55 to 45. 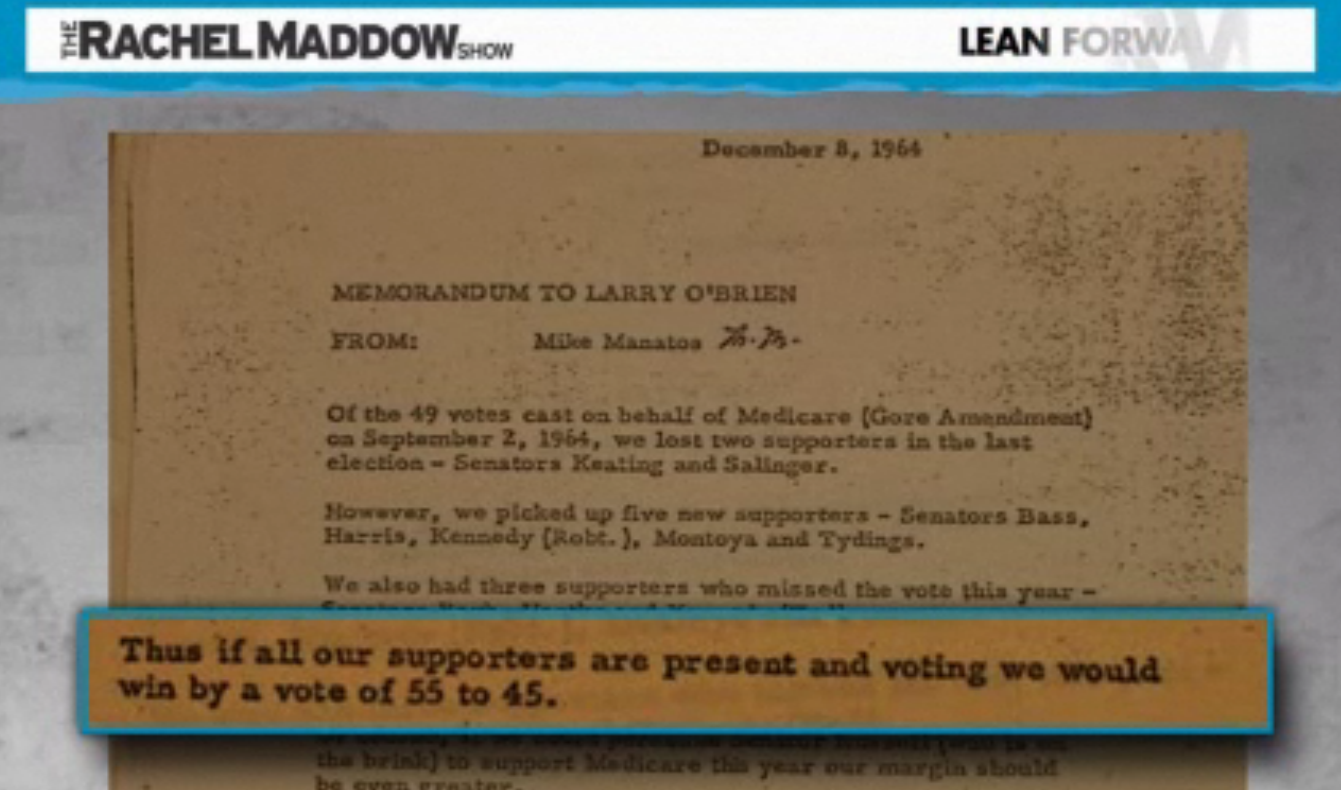 And of course, the overuse of the filibuster and cloture motion have been noted many times in the last few years. See this chart as an illustration of that point: 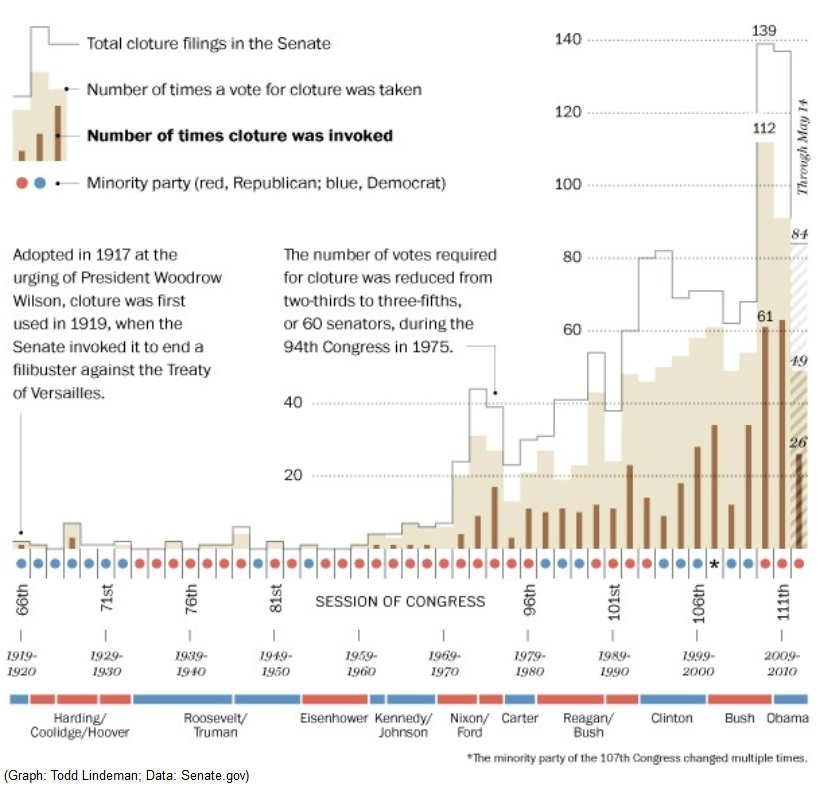 But some think Congress can't reform itself, and are instead seeking to have the Filibuster itself declared unconstitutional, and have filed with a brief with the Washington D.C., District Court which will no doubt end up before the Supreme Court.

Lest you think this is some political stunt by amateurs, reconsider that opinion. In an article for the Harvard Law School Journal on Legislation (btw the oldest and most respected peer-review publication in the legal profession), Emmet Bondurant lays out a very compelling scholarly and well researched paper showing the Founders had no intention of a minority blocking legislation via the filibuster (and notes that a lot of the modern use started with Southern Senators to prevent integration of the U.S. military and Civil rights laws (most notable was South Carolina' Strom Thurmond).

In Federalist 22, Alexander Hamilton savaged the idea of a super-majority Congress, writing that “its real operation is to embarrass the administration, to destroy the energy of government and to substitute the pleasure, caprice or artifices of an insignificant, turbulent or corrupt junta, to the regular deliberations and decisions of a respectable majority.”

In Federal 58, James Madison wasn’t much kinder to the concept. “In all cases where justice or the general good might require new laws to be passed, or active measures to be pursued, the fundamental principle of free government would be reversed. It would be no longer the majority that would rule; the power would be transferred to the minority.”

I'm not sure if this legal challenge will work or not. There are some calls for Harry Reid to not wait until next January to push for the changes, and instead use the nuclear option to pass important judicial appointments (83 nominations that have not been voted on, and a record also), and I hope he will do it. It's long overdue. Paul Krugman has drawn attention to how poorly our Senate works, with an ominous reminder from Poland's history:

… with the rise of power held by Polish magnates, the unanimity principle was reinforced with the institution of the nobility’s right of liberum veto (Latin for “I freely forbid”). If the envoys were unable to reach a unanimous decision within six weeks (the time limit of a single session), deliberations were declared null and void. From the mid-17th century onward, any objection to a Sejm resolution — by either an envoy or a senator — automatically caused the rejection of other, previously approved resolutions. This was because all resolutions passed by a given session of the Sejm formed a whole resolution, and, as such, was published as the annual constitution of the Sejm, e.g., Anno Domini 1667. In the 16th century, no single person or small group dared to hold up proceedings, but, from the second half of the 17th century, the liberum veto was used to virtually paralyze the Sejm, and brought the Commonwealth to the brink of collapse.

[2.] For Ezra Klein's historical background on the filibuster, you can watch this video here.