So it looks like we got ourselves a horse race. One horse is named Hurp, and the other one Durp. Or is that Derp? For the first full election cycle, we have Super-Pacs at Full Battle $trength, and churning the hubris by the 30 second airtime segment.

On the left, we have Left Side, They support Hurp
To Durp's wingman on the right, we have...Right Side. Yeah, I did them out of order just to fuck with you OCD/Aspie types.

Durps side calls foul, and crafts a response.

Repeat until the money run$ dry. Who wins? We know who gets the influence. But all that PAC dough: who gets the money, the real winner?

MEDIA WINS. Wow, you would think that media would have a vested interest in keeping the blah flowing, because where there is blah, there is revenue! Free Market!

So, WTF people? Is the National Elections all a clever media manipulation to get the rich Hurps n Durps to divert hard earned Free Market Money to the Media Manipulators? Are we all part of the Hurp n Durp Show, playing audience and sponsor?

I propose that we all turn off our TV's, magazines, billboards, bus stops, computers, walk away from the internet for 8 months, and see what the Free Market does to the Media Moguls. If that is too extreme, when you see an ad, and want their product or service, go find a small business that can't afford both payroll and a spiffy TV spot.

There is some serious shit in this post, you just have to dig to find it. Like treasure.

Or, you can do the sane thing and vote for Gary Johnson for POTUS. He will give ya what ya need©!

I see a lot of interesting posts during the course of the week, and I thought some of them would be of interest to some of community participants. Most of it is related this week to climate change, Super-Pac money, and even one for sports.

Here is Matt Stiles' (a data journalist at National Public Radio) very cool use of "Google Fusion Tables," showing the birth places of United States presidents. The first map uses push pins for locations (cf the interactive version here. Map no 2 uses same data, but aggregated by state and mapped with polygons. Darker shades represent more presidents. (cf. the interactive version here.) As a native of Virginia, I'm proud to see my state is apparently the largest contributor of Presidents. Hawaii is the newest addition to the map because of President Obama. Source for data. 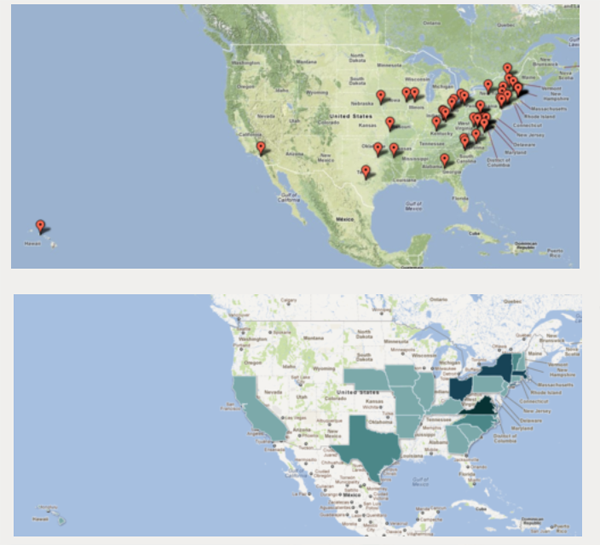 This is a informative chart, showing up to date information on Super-Pac Spending in the United States 2012 Presidential election, using data filed with the Federal Election Commission. A total of 53 super PACs have spent $94.1 million — 58% of which has been spent opposing candidates. A larger copy of the chart will open in a new browser window if you click here. The L.A. Times also has an interactive time-line version of this chart available @ here. I find it interesting how much Mitt Romney has protested on how much President Obama will be spending in the election against him, attacking him personally. I know it's very early still, but even I was surprised at how little the President has used so far. 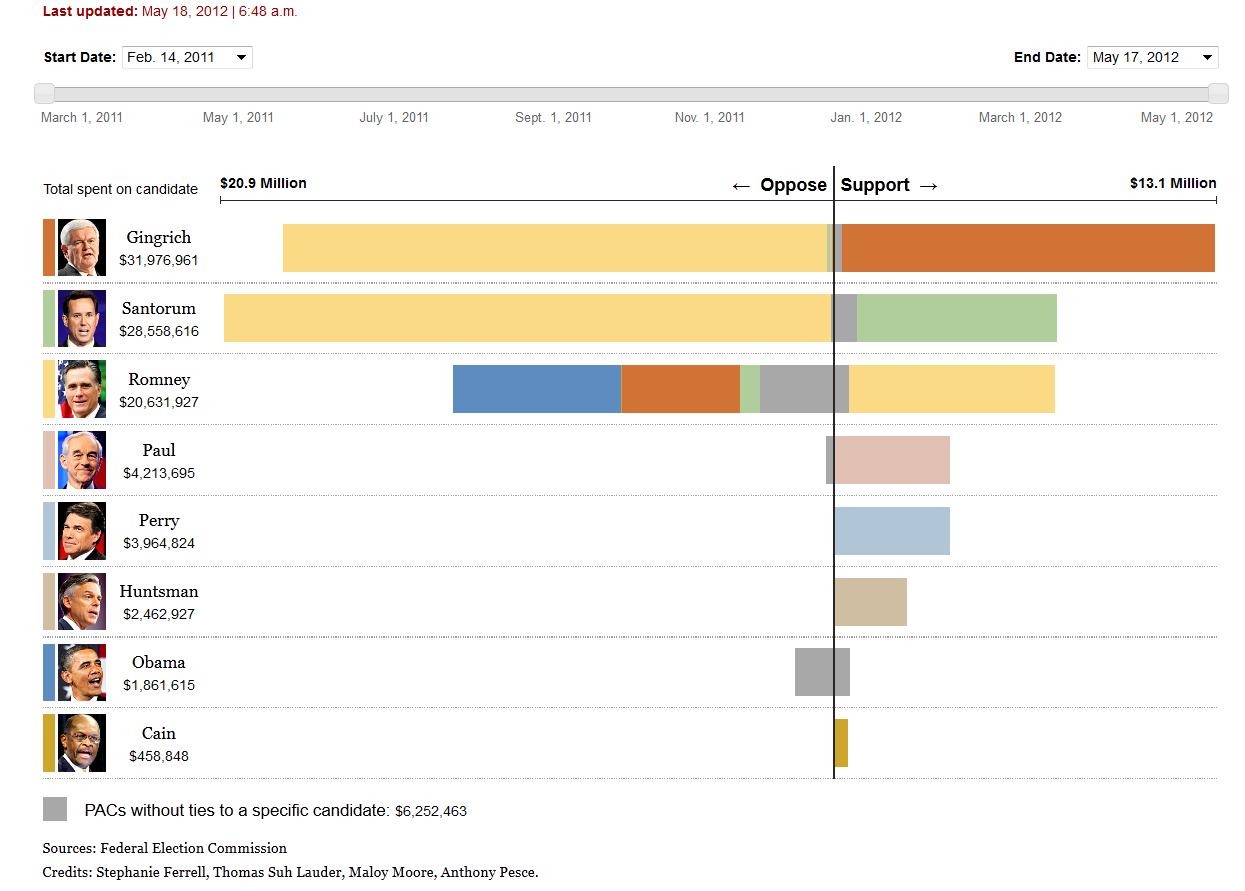 Here is a fascinating interactive map by Jonathan Corum showing the complex relationship of cloud cover to climate change on Earth on the New York Times' website. The story is linked to climate change denialists, who insist Earth's clouds will ultimately shield the planet from whatever is driving climate change. Most scientists believe that increasing climate warming will increase water vapor (i.e. clouds), and will actually amplify warming, not prevent it. 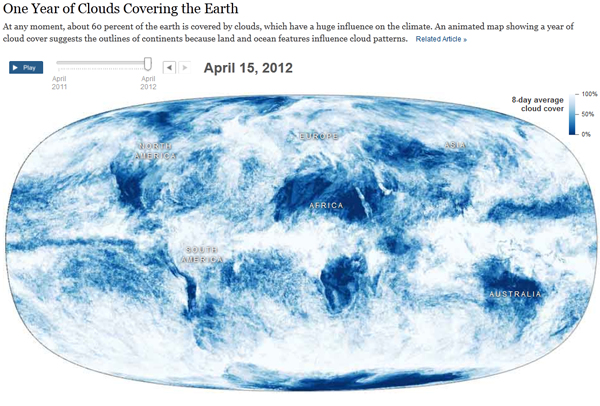 State Impact tracks drought damage in Texas, which has experienced the longest ongoing drought along with the warmest temperatures on record. Conservative estimates place economic losses at over 13 BILLION (cattle, crop and cotton failures due to lack of rain and the heat). Texas population will nearly double in the next 50 years, with less natural resources and water to supply that growth. There are efforts to encourage Texans to use treated waste water for drinking water (Houston drinks Dallas treated waste water), but there is considerable objections (aka "The Yuk" factor). 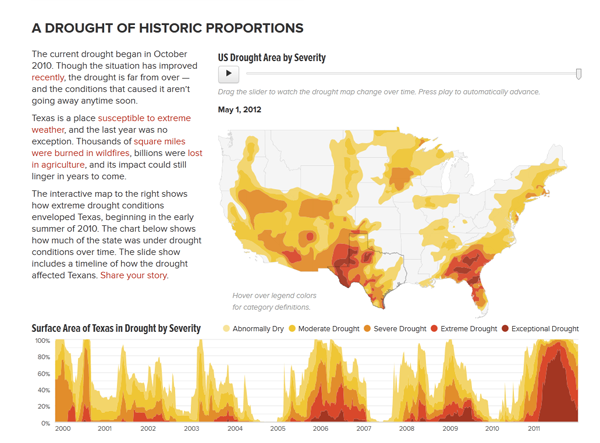 Yeah, it's not science but it qualifies because of the statistics and it's fun eye candy for our European brothers and sisters. A nice infographic on today's game between Munich and Chelsea (the Blues versus the Bavarians), with lots of information on players salaries, numbers of wins, etc. To see the larger version, click here. 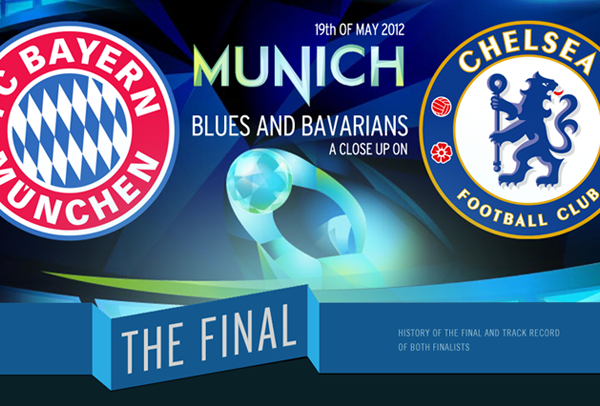