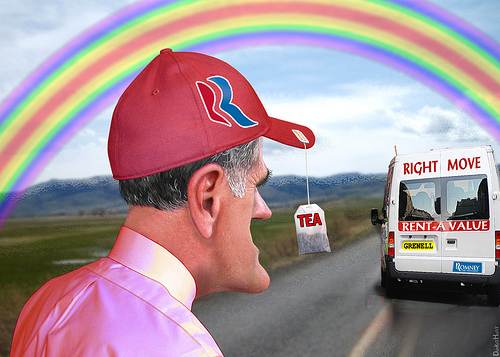 There is a fascinating right wing meme floating around the Internet. The essential summary is "So Obama came out for gay marriage. Big whoop!" Obama had to gather all his glorious courage into a fist, all his qualities of a leader and to finally join Dick Cheney on this topic. Of course the implication is Obama hasn't really done anything special here, and since it he can't do anything legally, it was a very safe but calculating campaign statement that has no real impact. But I disagree with the way this is framed, and the way it is rather dismissive of what President Obama has done for gay rights. And frankly, I'd like to turn the question back on them: so what did Dick Cheney do to influence policies in the Bush White House (in terms of gay rights)? In eight years did Cheney accomplish anything remotely along the following list?

The other interesting news this week was a leaked internal GOP talking-points memo by circulated by Jan van Lohuizen, who was President Bush's 2004 pollster and highly respected within Republican circles suggesting that Republicans need to evolve fast on gay marriage, or as Andrew Sullivan puts it, "risk their brand for an entire generation." Citing rapid acceleration on this subject by participants in both parties, Lohuizen suggests Republicans support gay marriage, citing it as a conservative value.

As people who promote personal responsibility, family values, commitment and stability, and emphasize freedom and limited government we have to recognize that freedom means freedom for everyone. This includes the freedom to decide how you live and to enter into relationships of your choosing, the freedom to live without excessive interference of the regulatory force of government.

1. Support for same sex marriage has been growing and in the last few years support has grown at an accelerated rate with no sign of slowing down. A review of public polling shows that up to 2009 support for gay marriage increased at a rate of 1% a year. Starting in 2010 the change in the level of support accelerated to 5% a year. The most recent public polling shows supporters of gay marriage outnumber opponents by a margin of roughly 10% (for instance: NBC / WSJ poll in February / March: support 49%, oppose 40%).

2. The increase in support is taking place among all partisan groups. While more Democrats support gay marriage than Republicans, support levels among Republicans are increasing over time. The same is true of age: younger people support same sex marriage more often than older people, but the trends show that all age groups are rethinking their position.

3. Polling conducted among Republicans show that majorities of Republicans and Republican leaning voters support extending basic legal protections to gays and lesbians. These include majority Republican support for:

a. Protecting gays and lesbians against being fired for reasons of sexual orientation
b. Protections against bullying and harassment
c. Repeal of Don’t Ask Don’t Tell.
d. Right to visit partners in hospitals
e. Protecting partners against loss of home in case of severe medical emergencies or death
f. Legal protection in some form for gay couples whether it be same sex marriage or domestic partnership (only 29% of Republicans oppose legal recognition in any form).

Recommendation: A statement reflecting recent developments on this issue along the following lines:

“People who believe in equality under the law as a fundamental principle, as I do, will agree that this principle extends to gay and lesbian couples; gay and lesbian couples should not face discrimination and their relationship should be protected under the law. People who disagree on the fundamental nature of marriage can agree, at the same time, that gays and lesbians should receive essential rights and protections such as hospital visitation, adoption rights, and health and death benefits.”

Other thoughts / Q&A: Follow up to questions about affirmative action:

“This is not about giving anyone extra protections or privileges, this is about making sure that everyone – regardless of sexual orientation – is provided the same protections against discrimination that you and I enjoy.”

“As people who promote personal responsibility, family values, commitment and stability, and emphasize freedom and limited government we have to recognize that freedom means freedom for everyone. This includes the freedom to decide how you live and to enter into relationships of your choosing, the freedom to live without excessive interference of the regulatory force of government.

And for some lulz, immediately after President Obama's interview, Fox Nation's website had this on its front page: 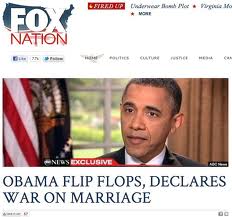 The histrionics of yet another Obama war on values, prompting some mocking from folks on the Internet, and has become a meme. Here's a few of them: 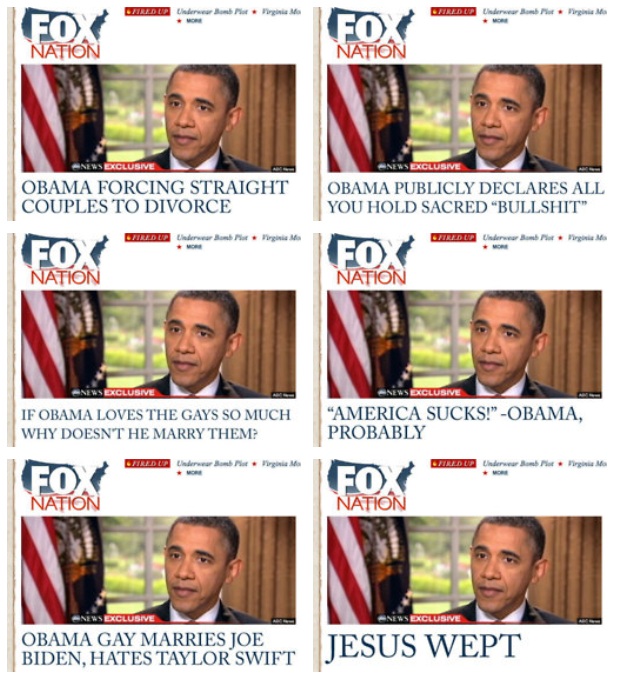 I like the idea of playing a relevant vid just for atmosphere while reading something, so here:

80 years have passed since the last time Nelson Mandela, the first black president of South Africa, visited school in his home town Qunu in the Eastern Cape. But even a brief look tells you that the place hasn't changed much since then. Smooth green hills rolling around the countryside, the occasional village house, most of them really shacks, painted in the traditional Xhosa colours, blue and yellow. Indoors - always a similar interior. The beds are lifted a bit from the ground, so that the night ghosts won't get you while you're sleeping. I'm sure the hosts meant the cold air that tends to drift just above the floor, but I wasn't willing to argue. Far to the west, the imposing peaks of the Dragon Mountains are hanging over lush pastures. That's the border with Lesotho, the mountain kingdom. It's like a world taken from a JRRT story, except this one is real. And I was fortunate to see it a month ago during a trip in the countryside.

Nothing suggests Qunu to be a place of pilgrimage. The only modern flat building in town is Mandela's museum. It sits lonely in the center of the village. A lady in green uniform sits there yawning, waiting in vain for someone to show interest in the presentation about Mandela's biography that she has learned by heart.

Until recently, the locals were having big dreams about hordes of visitors, new jobs, and good income. But today, most of them still keep living off of stock-breeding and whatever they can grow in their gardens: mostly spinach, cabbages and bananas.. At least their relatives who've moved to the big modern cities (Johannesburg, Cape Town, Durban) still haven't forgotten them. The Eastern Cape is perhaps the poorest province in South Africa. Electricity only arrived there in the late 90s. No ANC government has ever cared about that corner of the country: no bonuses, no stimulus programs, no nothing. Even despite the fact that it's Mandela's birthplace, and practically the cradle of the ruling ANC party itself.