Please. Before we start, forgive the source. I know it is biased. I state that up front, Kos is, at best, an anti-right alarmist site. How much they get 'right' is up to the perspective of the reader, no doubt.

But funny, I've said the same thing as this article opinion piece for years, that GOP obstructionism on matters of economic malady really borders on treason because they put an amazing amount of partisan hatred for Obama before the good of the country. To hold up critical (yeah, again in the eyes of the beholder) legisation to bully out (or in) social political Pop Tarts™ for those who score well below 20 on the "You Know What".

TBH, I don't want to dig through 3 years of examples of obstructionist bullying. It's all lying there for the rest of you to bicker over.

My questions is not "will they" hold hearings and find these white males guilty of treason. My question is "By conciously meeting and discussing such strategy, then enacting it, were these congressmen holding true to their oath of office"?

Again, linking sources to stories, studies and the like take a back seat to practical experience in this case. We are all old enough to remember the 2008 election, and what has transpired since. If someone can give me a few solid GOP backed plans that did not involve doing the polar opposite of White House supported legislation (ie: economic stimulus not involving tax cuts for rich), I would sincerely appreciate it. 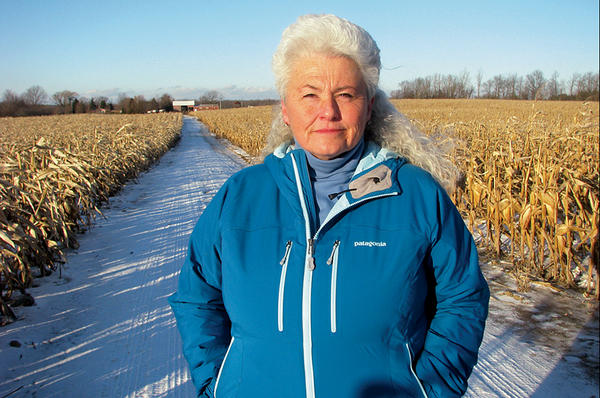 Lynn Henning a Michigan farmer and grass-roots environmentalist was interviewed by Bill Maher on his show last Friday April 20, 2012. Ms. Henning has been awarded the international Goldman Environmental Prize in 2010 (it's sometimes called the "Green Nobel Prize") for her work in educating the public about the health and environmental risks of CAFOs. That acronym stands for "concentrated animal-feeding operations" that house at a minimum of 700 head of cattle (but it is usually thousands). The animals never leave the inside of a building, and a group of CAPOs near where Ms. Henning lives in Clayton Michigan (population 326) produces millions of gallons of biological waste (i.e. blood, birthing fluids, urine, feces, unused milk, antibiotics, feed waste, etc) & as much as the city of Chicago (population 2,695,598). You can see the interview behind the spoiler. 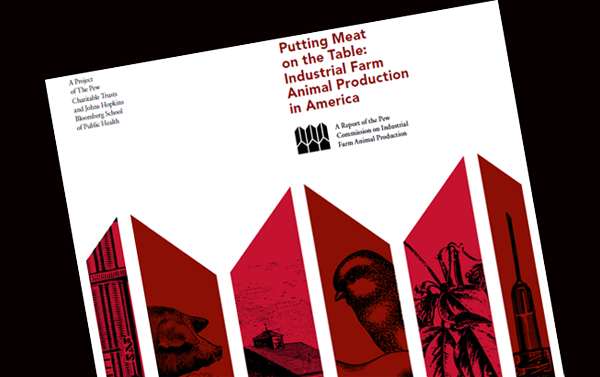 My curiosity was piqued by some of the comments in the interview. So I did some checking around and discovered the Pew Commission 1 Report on Industrial Farm Production. This mentions several concerns highlighted in the Bill Maher interview: over use of antibiotics and increasing resistant strains of pathogens or the creation of new bacteria and viruses and workers at such facilities are possible infection "bridges," transmitting pathogens to the general population. The reported increased health risks to those that live near such facilities (over ten specific studies are cited), usually respiratory issues. And the sheer amount of waste overwhelms these facilities, risking soil and water contamination by industrial toxins, bacteria, viruses, and fungii. 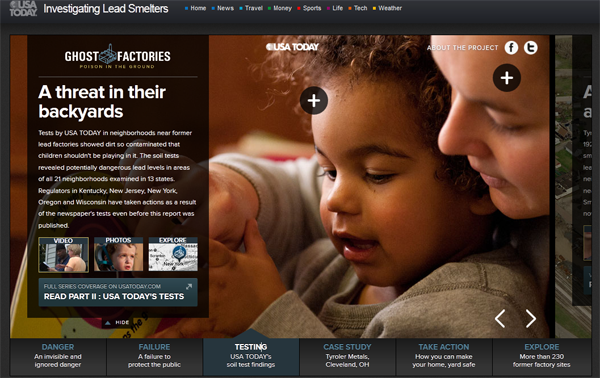 The other item mentioned during the Maher interview was report by USA TODAY about contaminated soil in US cities, where kids are essentially playing in playgrounds or their backyards that have dangerous levels of industrial toxins. The feature entitled "Some neighborhoods dangerously contaminated by lead fallout" ran last week, and concluded:

USA TODAY reporters spent two months testing soil in multiple spots in yards, with the permission of residents. The reporters also tested soil at public parks, schools, athletic fields as well as street-side strips of public land within a mile of the sites. Air-blown lead particles often drop in the immediate vicinity of factories, but the toxic dust can travel for miles.

The sites tested came from a list of more than 400 potential lead smelters believed to be unknown to federal regulators because they operated before the creation of the EPA. The list was developed by environmental scientist William Eckel, who published a 2001 article in the American Journal of Public Health warning that the forgotten factories might have contaminated surrounding properties.

The soil tests, part of an ongoing USA TODAY investigation, revealed potentially dangerous lead levels in parts of all 21 neighborhoods examined across 13 states. Although results varied house to house, the majority of the yards tested in several neighborhoods had high lead levels — in some cases, five to 10 times higher than what the Environmental Protection Agency considers hazardous to kids. 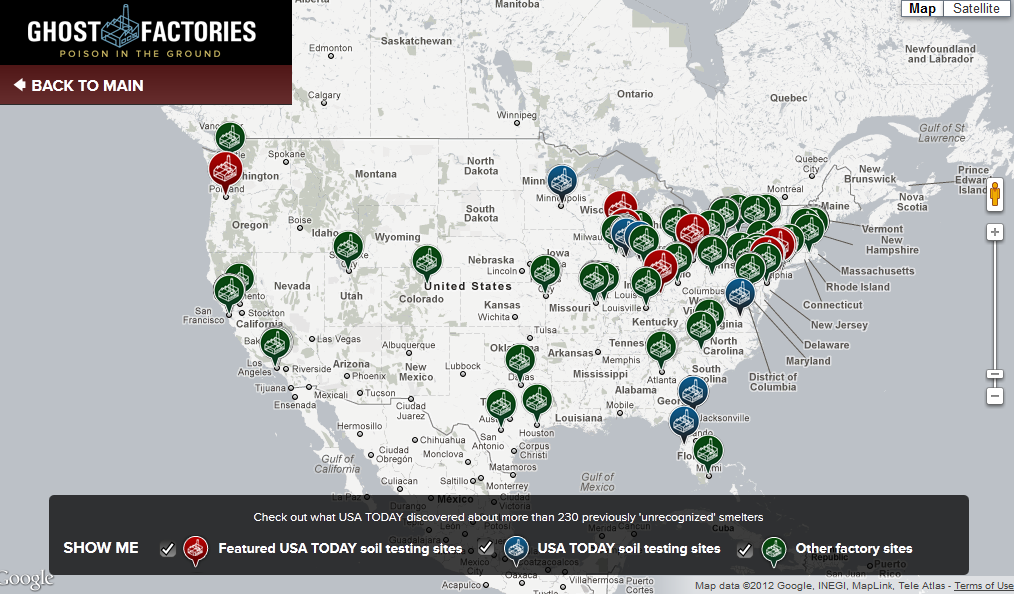 If are curious how close you live to one of these old lead smelting facilities, you can check out this informative interactive map produced by USA Today.

But one question Mr. Maher asked Ms. Henning, after hearing some stories about all the personal angst she's suffered for her positions: "Why aren't people on your side?" pointing out that Thomas Frank, the author of What's the Matter With Kansas" was on his panel that night (the basic notion of the book is that Americans typically vote against their own economic interest). While I think some of it is just most people aren't aware of what goes into meat production, it also takes a very informed and personal investment of time by citizens to keep a vigilant eye on these sorts of companies. And in the hustle and bustle of daily lives, raising children, there's just not the motivation by the public care on any great level. Contrast that with these companies and farmers who financial bottom line depends on this, and have the financial resources for lobbyists and contributing to elections for friendly elected officials at the local and state levels. Then the other issue is age. It's been an entire generation since the EPA was chartered by Congress. It's similar to most of us not knowing what life was like before the Polio vaccine: we just take it all for granted. So what to do? Well, there are some solutions too, including the use of farm waste to create energy. You can also buy meat that's not produced on COFAs by finding local farms and or grocery stores that raise cattle and poultry via traditional farming methods via Local Harvest.


=====================
1. The Pew Commission is a independent commission of the Pew Charitable trusts and their report on industrial animal production was funded in part by a grant from John Hopkins School of Public Health. FAQ about the commissioners and their credentials are answered here.

2. "One farmer acts to save environment from factory farms". The Christian Science Monitor. April 26, 2010 by Yvonne Zipp.

3. The staggering cost of rising world meat production, a New York Times business section report on the ecological and financial costs of meat.

Here we are again, with a new portion of ridiculously hyperbolized hypothetical situations taken from the NationStates online game, the place where you own a whole country which you're completely unrestrained to rule as you please, disregarding the will of its billions of inhabitants, uh huh. Last time the issue was a tough one, a neighboring country stirring shit in the region, and you wondering how to deal with it. Mr Limpopo the tabloid columnist won the poll by a narrow margin, proposing a rather pragmatic approach to your new neighbor regime.

The Issue
Following a record number of affirmative action lawsuits last month, the creative minds, radio personalities and actors of Insert Country Name have come to your office demanding the government take action.

While we're on civilisations and empires, what about the story of the Brazilian Empire? Because yes, there was an empire in Latin America that wasn't Spanish or Portuguese. The story of Brazil's success is quite remarkable by itself, so do bear with me.

First of all, we could say Brazil appeared by incident. Actually two incidents. In 1494 the Spanish-Portuguese Treaty of Tordesillas divided the world in such a way that a large portion of South America fell into the Portuguese sphere of influence. Then in 1500 Cabral's fleet reached the new shores for the first time, and this kick-started the history of Brazil.