Arizona House Bill 2625, authored by Majority Whip Debbie Lesko, R-Glendale, would permit employers to ask their employees for proof of medical prescription if they seek contraceptives for non-reproductive purposes, such as hormone control or acne treatment.


‘I believe we live in America. We don’t live in the Soviet Union,’ Lesko said. ‘So, government should not be telling the organizations or mom and pop employers to do something against their moral beliefs.’

Jezebel points out that Arizona is an “at will” state. This means that bosses in Arizona will be able to fire women for being depraved enough to take birth control pills to prevent pregnancy.

As we all know, what made the Soviet Union infamous were not the gulags, its treatment of dissidents, and the rigid control over the press, but the fact that women could take pills for the purpose of contraception without fear of losing their jobs over it.

Yes, here it is -- the right wing's idea of "freedom" is a society where a woman has to ask her boss' permission to use oral contraceptives.

Does anyone else find this more than a little weird? 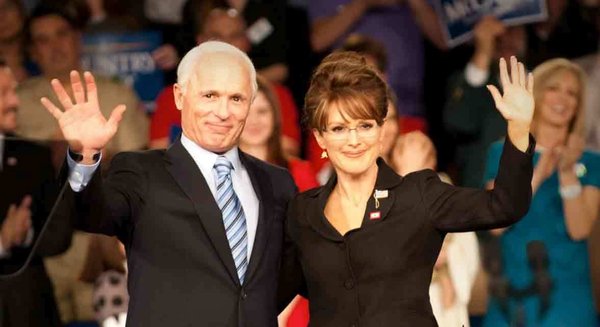 Has anyone watched HBO's Game Change, detailing the Sarah Palin vice presidential run? Since it first premiered on Saturday night: it's the highest rated HBO movie of all time. And Julianne Moore's performance is getting rave reviews. The movie is based on the book of the same title by John Heilemann and Mark Halperin, which was based on interviews with participants in all the campaigns (the book deals with a lot more subject matter than just Sarah Palin's run). Watching the movie reminded me of all the hot screaming debates on Livejournal at the time and pretty much (surprise surprise) vindicates a lot of the concerns with Palin's just in way over her head, stubborn and vindictive, and functionally illiterate on policies and even basic high school knowledge (i.e. Palin thought the Queen of England was the head of state for Great Britain). The movie included new material that wasn't in the book, including the fact that Palin's senior advisor Nicole Wallace, ended up not voting in the election because she was so disturbed at Palin being so close to the Presidency. I'm curious if anyone else had some thoughts about the movie, or read the book the movie was based on? Behind the cut is a embedded copy of the post Katie Couric interview, where Palin confronts Ms. Wallace, blaming her. ( Collapse )

That is to say a good-news story which has every reason for grounds for optimism:

The International Criminal Court, in trying one of the war criminals from the forgotten continental wars in the Congo, has found one of these men guilty. This is the first such verdict in the ten years since the Court was established, and as such is setting a new standard for and about international law, which is also a plus. It's the first occasion since the end of the World Wars that there's been such a trial that has not been held by a Great Power of the losing side of a war, but instead a trial conducted by a court of war crimes on the basis *of* such a court.

This is a good sign, really, on an international scale as it means that the global legal system is evolving in a good way, less prone to the internal domestic politics and dickwaving of the Big Powers and in theory at least more impartial and fair and balanced for all Powers.

Isn't really an induction. Ergo, no tragedy. And as we know, a week is a long time in politics. Any predictions made now are, er, suspect. One might almost think that some folk are hoping for a kind of magical wish-fulfillment.

Nice, but no dice, as yet. Methinks such shilling is a trifle premature, though a necessary part of the political process/debate. But I do find the framing of the debate (as was) rather disingenuous, and ingeniously so. So now comes the question: is premature (ahem) thingummy just down to men-folk on T_P? Or men in general? Or merely pundits in particular?
Collapse