First, a bit of background.  In 2010 Holder v. Humanitarian Law Project upheld a provision of the USA PATRIOT ACT which prohibited U.S. citizens from providing "material support" to groups designated by the U.S. State Department. "Material support", in this case, included “advocacy [is] performed in coordination with, or at the direction of, a foreign terrorist organization”, making it a explicit restriction on First Amendment rights. Now it seems several former U.S. officials have violated that clause by advocating for MEK, a group which forms a key part of domestic opposition to the Islamic Republic of Iran. What's more, they have been paid to do so:

Former US officials taking part in MEK-linked events told the Monitor or confirmed publicly that they received substantial fees, paid by local Iranian-American groups to speaker bureaus that handle their public appearances.
The State Dept. official, who is familiar with the speech contracts, explains the mechanism: “Your speech agent calls, and says you get $20,000 to speak for 20 minutes. They will send a private jet, you get $25,000 more when you are done, and they will send a team to brief you on what to say.”

Over 2300 years ago, Pythagoreans made a scientific breakthrough when they were able to conceive of a moving Earth. The idea was attacked as blasphemous from a number of quarters. To Pagans, the idea threatened the power of the solar cult. To other philosophers, publication of such esoteric concepts violated the dignity of the profession. Centuries later, Roman Catholics martyred one of their own monks and banned the writing of a Roman official who had stumbled upon the ancient insight into celestial mechanics. Such breakthroughs in perception are called paradigm shifts because they change the way we view the natural world. Once the transition in perception is made, it becomes difficult to reverse.

At the time of the persecution of Galileo for speaking truth to power, another inquirer with interest in pre-Christian literature breathed new life into the ancient notion that the mind is influenced by bodily fluids. The notion that black bile causes mental degradation was revived and given new legs with the added idea of a theater of inner thought. As with astrophysics, life sciences progressed with further inquiry. A breakthrough in neural science occurred three and a half centuries ago when a biologist discovered that electric current induces muscle contractions. This led to modifications of the Cartesian biochemical paradigm that remain with us today in the form of an obsession with neural "firing" and bio-chemical interference with electrochemical reactions.

The next major breakthrough occurred in the middle of the previous century when a researcher observed wave patterns in neural activity. This has led to the electromagnetic neural wave paradigm of mental activity. The paradigm shift from a Galvanic system to a neural wave system is just as great as the shift from a static Earth to a moving Earth. There is as much resistance to this paradigm shift within the bio-chemical priesthood today as there was resistance by the Roman priesthood to a moving Earth paradigm at the turn of the seventeenth century.

The political implications of the neural wave paradigm are greater than merely demonstrating the charlatan nature of an entire priesthood. Personal electromagnetic space cannot be easily separated from the space outside the nervous system. In the US, the federal government is chartered with the responsibility of regulating use of the electromagnetic spectrum. It thinks of itself as the ultimate owner of all electromagnetic wave space, including the space between the ears of individuals. The hubris of American martial practice does not end at federal borders, neither does its sense of wave space ownership.

What do you think of the Pentagon's attitude toward your personal neural wave space?


Note on tags: Forgive the moderator. He is young and is not aware of the consequences of his actions. 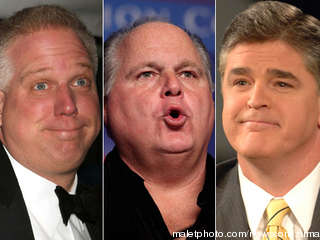 Calling a woman a "slut" on national radio has turned out to have been a watershed in advertisers pulling support for not just Rush Limbaugh1, but conservative talk radio in general. Premiere Networks which carries Mark Levin, Rush Limbaugh, Tom Leykis, Glenn Beck, and Sean Hannity, has circulated a list of 98 sponsors that do not want their ads to run on the leading right wing talk shows. Some of the advertisers include: Ford, GM, Toyota, Allstate, GEICO, Prudential, State Farm, McDonald’s, and Subway. The combined audiences for these radio shows is substantial: nearly 46 million daily listeners. 2 The licensing fees for these national radio shows are very expensive, and without the support of advertising dollars, most local stations will be unable to continue broadcasts.

Hey, the monthly subject is money in politics, right? OK then...

Kidding... Well, I think THE Newt has something like a guardian angel of some sorts. In the form of a rich tycoon named Sheldon Adelson who for some reason adores The Newt. See, our angel owns several casinos in Vegas. And he's such a big fan of The Newt that he keeps opening his wallet again and again, and splashing millions to prop up his fave Newtster. Like last week when he dug up $10 million and donated it to Newt's super-PAC (which he does not collaborate with in any way whatsoever, huh huh). In fact Newt would've probably dropped out of the race a looong time ago if it wasn't for his wealthy guardian angel. Just look at his record: he only won 2 states, one of them his own home state Georgia. Virtually everywhere else he's come way behind the frontrunners. Curiously, Mr Richy-Angel has said himself that he's against wealthy people tilting the election in one way or another, but he also added that he'll keep doing that same thing, as long as it's allowed by law. And there's the catch. "It's wrong but it's allowed, so I'm in!" Very convenient.

Of course the US election law says that individuals and corporations cannot donate more than $2000 to a politician's campaign - at least not directly. And here's the catch. Because, you see, actually Adelson ain't giving the money directly to Newt, nah... he's just funding a group called Winning Our Future, which happens to be what we now call a super political action committee (super-PAC). A brand new species in the political zoo.