Rick Santorum was recently confronted by a mother and her sick child over the high cost of her child's medicine. His response?

You’ve been conditioned to think that healthcare is something you should get and not have to pay for it.

He then went on to equate the $1 million a year cost for this drug to someone buying an Ipad for $900. “There are many people sick today who, 10 years from now, are going to be alive because of some drug invented in the next 10 years,” Santorum said. Well yeah. Maybe.

If they can afford to pay for it.

I sympathize with these compassionate cases. … I want your son to stay alive on much-needed drugs. Fact is, we need companies to have incentives to make drugs. If they don’t have incentives, they won’t make those drugs. We either believe in markets or we don’t.

Too bad that lady is so "conditioned." The UNconditioned response, I guess, is for her to calmly accept that her child is just going to have to be sacrificed on the altar of the free market.

Santorum will be sure to look sad when he gets the news, and maybe even send some flowers.

In a sign of how long a time has passed since the last time the Germans proposed controlling the economies of other states, this proposal was recently made:

For the life of me, I cannot possibly find one thing to defend this on any point of view that favors freedom, individual rights, or individual autonomy. The Germans have a massive debt problem of their own, by their own selves without having bailed out other countries to further the European debt issue. The Germans have no real room IMHO to declare that they could or should take over the economies of other countries on this problem, namely hypocrisy of the strong over the weak, alone. When we get into the many issues of how little-equipped Berlin would be to make Greeks pay taxes when their own government is incapable of so doing, the absurdity worsens. When we try to square that this idea is remotely broached in a fashion that it might be acceptable to any significant number of people, it's worth questioning whether the EU as presently constructed can endure a pretense of democracy in any real sense.

I think this is a rather unpleasant idea and if it's agreed to by the Greek government I foresee it being deposed by the Greek military in the near future. Your thoughts? 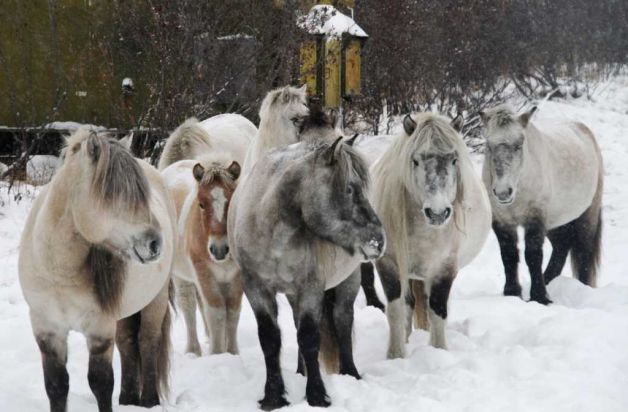 Semi-wild Yakutian horses are seen at the Pleistocene Park, a 40,000 acre wilderness in northern Siberia, Russia.

Last month the UN Security Council had a meeting where one of the main topics was Africa's role in resolving its own crises. An important detail here: the meeting wasn't simply chaired by the permanent African representative in UNSC, South Africa (which since January is also chairing the Council), but explicitly by SA president Jacob Zuma. Despite the fact that formally the topic was only limited to the issue of strengthening the African mission in Somalia, what the real purpose of the meeting was, is no secret: the African Union has decided on a transition to a qualitatively new phase of its activities, a more active role that would put it out of the guardianship of the UN.

The policy of the African countries to try to take the responsibility for solving their "own" crises in their own hands is understandable - after all, more than 70% of the issues on the agenda of the UNSC usually concern Africa. However, there are presently only three African representatives in the Security Council (South Africa, Togo and Morocco). At the same time, Morocco is considered part of Africa only geographically but not politically, since it is not a member of the AU, and neither is it part of the Organisation of African Unity. The African region has the largest number of countries than any other (54, and counting), but just a single permanent seat on the UN Security Council.

[[Please be warned that some of the images in this video are very disturbing]].

Over 70 dead and hundreds of injured. That's the horrible result from the football massacre in Port Said today. Whether the security forces or the military council would officially assume responsibility for this bloodbath is beyond the point right now.

Al Masry and Al Ahly, the two teams who met in Port Said and whose fans arranged a mini civil war between themselves, will remain in history as the clubs who were involved in the greatest disaster in the history of Egyptian football.

The blood-stained match was followed by mass protests against the military junta. That's just one facet of the bigger picture of the rising discontent and disillusion of the Egyptian people with the failure of the military to restore law and order after seizing power.

Adbusters, a magizine devoted to marketing criticisms has been credited with the initial "spark" that begat the OWS when it made the suggestion last year. Adbusters personal have refused to grant interviews or make any statement regarding Occupy Wall Street or any other Occupy movement.
( Collapse )
Collapse