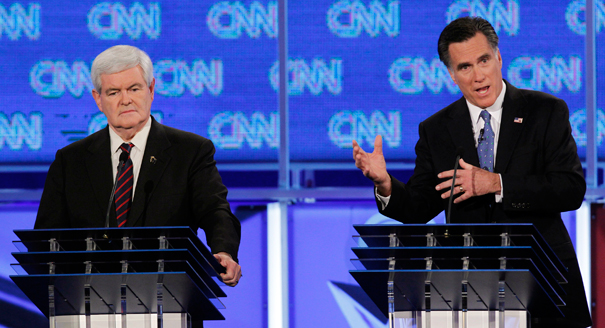 Yesterday was a tough day for former Speaker of the House Newt Gingrich. First up, Bob Dole wrote an extremely critical letter of Newt, writing

I have not been critical of Newt Gingrich, but it is now time to take a stand before it is too late. If Gingrich is the nominee it will have an adverse impact on Republican candidates running for county, state and federal office. Hardly anyone who served with Newt in Congress has endorsed him, and that fact speaks for itself. He was a one-man-band who rarely took advice. It was his way or the highway,” said Mr. Dole in the letter released Thursday. “Gingrich served as Speaker from 1995 to 1999 and had trouble within his own party. Already in 1997 a number of House members wanted to throw him out as Speaker. Gingrich had a new idea every minute and most of them were off the wall. He loved picking a fight with Bill Clinton because he knew this would get the attention of the press. This and a myriad of other specifics helped to topple Gingrich in 1998.

Little known fact about Sweden, that supposed bastion of liberal idealism: If a Swedish transgender person wants to legally update their gender on official ID papers, a 1972 law requires them to get both divorced and sterilized first.

Sweden is considered extremely gay-friendly, with one of the highest rates of popular support for same-sex marriage, and more than half the population supports gay adoption. Arguing that the current law is both unpopular and abusive, the country's moderate and liberal parties want to see it repealed. In response, the small but powerful Christian Democrat party formed a coalition with other right-of-center parties to join in upholding the requirement for sterilization. End result: a proposal for new legislation that allows trans—a preferred term for many people who undergo gender reassignment—to be married but continues to force them to be sterilized.

Okay, WTF, Sweden? Now I get that the people who are fighting to keep this one the books are in the minority. But it's pretty amazing this wasn't struck down years ago. Is this a well known law? And how long until this is used as fodder for Law & Order: Sweden?

I like that the article contrasts this to the forced sterilizations that happen in the US. It's odd how contries can go such different ways on this sort of thing. As messed up things can get with gay right in the US a law like this would have been given the boot ages ago.

In the light of this, does the panel think:

1 - Obama's got it just about right?
2 - Osborne has got it just about wrong?
3 - That the US with  its economies of scale, and the currency of which is the world's reserve currency, distorts the normal economic models which apply to the UK?
4 - That such analysis will figure at all in the upcoming US Presidential election?

My own opinion is that it appears the bail-out may have kept the US from the worst ravages of the recession thus far. Even if Europe now upset the applecart, I am of the opinion the US will still be better off for the bail-out than otherwise.

And I am of the opinion that the US' economic woes are far from over, but that structurally it can do perhaps what the UK, Germany/France, and Japan can't do, thanks to the positioning of the Dollar. Which means, from a practical perspective, Obama and Bernanke et al got it more-or-less right: for a given value of right, devoid of ideological normatives, that is.

Of course I'm certain that there is someone would care to argue that the US recovery would have been faster and bigger had strict Austrian principles been adhered to…something closer to the way that G. Osborne Esq. is doing things, perhaps.

But somehow or other I might just point out that events sometimes favour the opinions of folk who hold those opinions for no good ideological reason, and therefore such events can be discounted as being either not germane, or anomalous. So you don't have to argue with me. Obviously your ideology is purer than my brute empiricism and general rules of thumb.

And you know what? I'd have a tenner on Obama winning the election: and as of now it's as close to a fifty-fifty bet as I can reckon. But if Europe tanks, I'd say all bets are off.

From Uncyclopedia: The State of the Union is a method of compressing lies and bullshit into an hour or two long transmittable file. It is created to tell us what the POTUS thinks, received in a room full of crusty and aging men and women who lost their souls long ago and whose genitals are shriveled and infected from lack of use. Generally, when the state of the union is broadcast, people still tend not to give a shit and change the channel to American Gladiators. After this event is over, as a clever way to distract the uneducated masses from what was actually said, various pundits raise opinions and witty banter of the Address.

Downshifting literally means switching to a lower gear in life. It is a curious social movement that promotes a new, or should I call it, old lifestyle, and in a way is a utopian escape from the realities of modern urbanised life. People who "downshift" are often ones who have been very successful, who have made building a career the purpose of their life, and who have very little time for having a personal life. Then suddenly something dramatic happens in their life, a major shift in their thinking, possibly some cataclysm which makes them make a complete 180'. The idea underpinning downshifting is that if people could remove their focus from all the useless stuff that they buy just because they can, and if they reject blatant materialism and mindless consumerism, even from a purely pragmatic standpoint they would be having much less expenses, and would therefore need to work less. Only then would they be truly free to do the things they have always dreamed of doing. So the motto of downshifting is "Being, rather than having".

Downshifting was born as a reaction to the post-modern society which is trying to convince us that those who make the most money, who drive the shiniest cars, who live in the most modern homes, are the truly successful people. With time, our society has put social status and career-making on a pedestal, and turned it into god.

Yes, you heard this right, an Atlanta Newspaper called for a foreign country to put out a hit on the incumbent US President. This, ladies and gentlemen, is something we should all agree is completely and utterly indefensible. Even on its own bizarre merits this "argument" would qualify for one in the sense that dancing naked grabbing your balls and dick in the middle of an artillery barrage makes sense.


And the longer explanation: I believe we can all agree that if the idea is to have the USA fight Israel's battles for it that having the Mossad off the POTUS is exactly the wrong way to go about it, and that if the Israelis did do this their military capacity would be extinct in a week later, tops. I think we can all also agree that this guy in the most optimistic sense was doing an epic trolling, if he's serious he's seriously insane, right?
Collapse